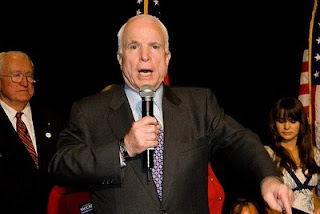 What Did He Tell Tbilisi?

John McCain's top foreign policy adviser, Randy
Scheunemann, has for years been an essential conduit
for the relationship between the United States and
Georgia, the former Soviet republic that has been
pounded by the Russian military for the past week.

He was Georgia's top lobbyist in Washington until
earlier this year. He has taken leave from his lobbying
firm, Orion Strategies, but he is still listed as
president of in the firm, which has received nearly
$900,000 from the Embassy of Georgia since 2004.

Scheunemann is tight with the Bush administration and
many neoconservatives in Washington's foreign policy
establishment. A former aide to Sen. Trent Lott (R-MS),
Scheunemann also has easy access to lawmakers like
McCain, whose office Scheunemann has lobbied directly
in recent years.

For the Georgia government back in Tbilisi, having
Scheunemann on the payroll in Washington has been
empowering.

"Randy Scheunemann is at a vital nexus...and it made
Tbilisi feel as if it was wedged into the back pocket
of Dick Cheney," Steve Clemons, head of the foreign
policy program at the New America Foundation in
Washington, told TPMmuckraker today.

Scheunemann's primary mission on behalf of Georgia was
getting the Russian border state on track for NATO
membership, according to Scheunemann's filings with the
Department of Justice database maintained under the
Foreign Agent Registration Act.

NATO membership would include a mutual defense pact
that could legally draw the U.S. and the rest of Europe
into a conflict between Georgia and its neighbor to the
north.

Of course, Russia loathes that idea and even some
Americans think it's unnecessarily risky and
provocative. But pushing NATO further eastward and
ultimately up to the Russian border has long been a key
mission for hawkish Republicans and neoconservatives.

The Bush administration has been a big proponent of
Georgia's NATO bid, despite resistance in Europe. Bush
visited Georgia in 2005 and has been especially chummy
with Georgia's president, Mikheil Saakashvili, the
young Georgetown-educated pro-American leader.

It sure made for great rhetoric -- casting Georgia as a
beacon of spreading democracy and freedom.

But now, since violent clashes have erupted between
Georgia and Russia, the Bush administration is taking
some blame for not reigning in its small and militarily
weak ally.

After all, it was the Georgians who catalyzed this
week's bloodshed when its military mounted an incursion
into South Ossetia and confronted the Russian troops
there (prompting many to ask: what were they
thinking?).

"I would say Georgia has a very good PR team. The U.S.
and the Georgian government built a very close
relationship and it was too close for the good of
either party. . . The U.S. allowed Saakashvili to get
too puffed up and think he could fly too close to the
sun," Charles Kupchan, a senior fellow at the Council
on Foreign Relations and a professor at Georgetown
University, said in an interview today.

Few on this side of the Atlantic doubt that Russia's
response was brutish and heavy handed. But the Bush
Administration is taking a lot of criticism for
possibly sending mixed signals to the Georgian
government about our level of commitment and support
for the tiny nation. (Those critiques are, for example,
spelled out here, here and here.)

Georgia was until this week the third-largest
contributor of troops to Iraq after the U.S. and Great
Britain, where its roughly 2,000 troops were welcomed
by the Bush administration.

State Department officials insist they were clear that
Georgia should not expect U.S. military support in case
of a clash with Russia.

Sure, that was the official line. But we can't help but
wonder, what did Scheunemann tell the Georgians? While
they were paying his firm hundreds of thousands of
dollars a year to help build a strong relationship with
Washington, how did he characterize the level of
support Georgia might expect?

"Saakashvili overplayed his hand. He believed he had
the world's best lobbyist helping him not only with
Cheney- land. . . but that he also had this wedge into
the nerve cell of John McCain, who he may have believed
would be the ultimate victor over Barack Obama."

[Andrew Tilghman, a former Iraq correspondent for Stars
and Stripes, is a staff writer for the Marine Corps
Times. He lives in Washington, D.C., and can be reached
at tilghman.andrew@gmail.com.]