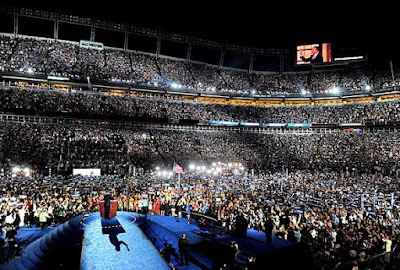 by E. J. Dionne
DENVER -- For months, the magic that once surrounded Barack Obama's presidential candidacy was lost in a fog of petty politics: the negative ads, the Clinton dramas, the degrading of Obama to the status of a mere "celebrity," the back and forth with John McCain over who is an elitist and who is a flip-flopper.
The recent direction of the campaign reflects a basic political fact that Obama acknowledged in his acceptance speech last night when he warned against those who were trying to make "a big election about small things." Obama has a good chance of winning a big election. He could well lose a small one.
The McCain campaign has done all it could to bring Obama back to earth and to dissipate the sense of possibility he once inspired. But in defiance of his opponents' efforts to discredit the very idea of mass rallies, Obama grabbed the magic back last night as an Invesco Field crowd of some 80,000 roared around him in the sweep of spotlights in the night.

His message focused on bread-and-butter empathy, on harnessing John McCain firmly to President Bush's views and record, on a lengthy list of policies that stood as an answer to critics who say his campaign is longer on inspiration than on specifics. It was a speech aimed less at stirring the faithful, though no doubt it did, than at persuading and reassuring those who harbor doubts.
But the medium and Obama's oratorical power served to underscore his effort to recapture a sense of movement and reinforce his claim that "all across America, something is stirring."
If it did nothing else, this week's Democratic National Convention served as a reminder of the historical import of Obama's nomination and the astonishing transformation of the country in just three generations.
This year, after all, is the 60th anniversary of one of the most significant convention speeches in our history. In 1948, a young Minneapolis mayor named Hubert Humphrey electrified Democratic delegates gathered in Philadelphia with a bold endorsement of President Harry Truman's civil rights policies and the "promise of a land where all men are free and equal."
"There are those who say to you: We are rushing this issue of civil rights. I say we are 172 years late," Humphrey declared. "The time has arrived for the Democratic Party to get out of the shadow of states' rights and walk forthrightly into the bright sunshine of human rights."
The Democrats adopted the civil rights plank that Humphrey called for -- and a group of Southern delegates walked out and formed a breakaway segregationist party.
Now, the same Democratic Party has nominated an African American for president, a man who is the product of an interracial marriage that was, in Humphrey's day, illegal in many parts of the country.
This time, there was no walkout, no protest. To the extent that there has been discord here, it has arisen from a parallel equal rights movement led by women who had hoped to make Hillary Clinton the first female president.
And when Obama picked Sen. Joseph Biden as his running mate, little notice was paid to Biden's Roman Catholicism, except to the extent that this might be a political asset. At the time of Humphrey's speech, only one Catholic had ever been nominated for president, and Al Smith was trounced in 1928 in a campaign that dripped with bigotry.
But voters do not cast ballots just to break historical barriers, and some might be reluctant to do so. The genius of the early Obama campaign was its success in welding his standing as a breakthrough candidate to the idea that he was uniquely well placed to "turn the page" of history at a moment when so many voters are frustrated with the Bush administration's record and alarmed at the prospect of American decline.
Last November, when his campaign was flagging, Obama set himself on the path to nomination with a rousing speech at a Jefferson-Jackson Day dinner in Des Moines. He linked the valor called forth in the civil rights years -- "standing up, with courage and clear purpose, they somehow managed to change the world" -- with the audacity required now.
Nine months later, on a clear Colorado night, Obama took the political pulpit again, this time to offer more detail, to make an extended argument, to answer his critics and to reassure the doubters. But in Denver as in Des Moines, he drew on the aspirations of the civil rights years to rekindle the sense of possibility and transformation that has, all along, been his campaign's central promise.
Copyright 2008, Washington Post Writers Group
Posted by Paul B at 1:56:00 PM