Bring an End to 'Triple Evils’ by Abandoning War 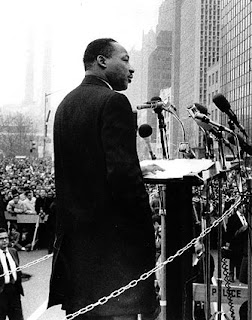 [Note: Leslie Cagan serves as the National Coordinator of our parent group, United for Peace & Justice]

Caption: At the United Nations building in New York, King speaks at a Vietnam War protest in 1967. "We are criminals in that war, King said in 1968." (Associated Press)

Published on Sunday, April 5, 2009 by The Atlanta Journal-Constitution
by Kevin Martin and Leslie Cagan

Saturday marked the tragic anniversary of the 1968 assassination of the Rev. Martin Luther King Jr., but also the anniversary of his “Beyond Vietnam” speech one year earlier. In that 1967 speech at the historic Riverside Church in New York City, one of the most inspiring anti-war speeches ever delivered, King decried the “triple evils” plaguing our country — “racism, extreme materialism and militarism.”

Were he alive, we believe King would urge President Obama to use his political and rhetorical skills to call on our people to cure these ills still so prevalent in our society. A first step would be ending the U.S. occupation of Iraq and, instead of sending an additional 21,000 troops, begin bringing home the troops in Afghanistan.

And we humbly suspect that King would have been with us Saturday in Manhattan when we and other peace advocates marched to Wall Street to call for an end to war and corporate bailouts and for investing in our communities and human needs, environmental restoration and a green economy for all. Or as King so concisely phrased it, to “rapidly begin the shift from a thing-oriented society to a person-oriented society.”

Most of the people of this country, and around the world, want Obama to succeed. However, his escalation of the war in Afghanistan, as well as the ongoing occupation of Iraq, threaten to make a shambles of his domestic economic agenda, as well as his presidency, as the Vietnam War did to President Lyndon Johnson’s presidency.

Haven’t we had enough of war? We need to devote all of our energy and attention to addressing the global economic and climate crises, and to improving education, housing and health care in this country, not squandering $12 billion per month on the occupations of Iraq and Afghanistan.

As to fighting terrorism, a RAND Corp. study released last year found that only 7 percent of terrorist organizations end their terrorist activities because they are defeated by the use of military force. Sending more troops is not the way to combat the dangers of terrorism.

Obama’s announcement of his Afghanistan and Pakistan policy did include some positive initiatives, including increased support for regional diplomacy and economic aid to the two countries. Those should be the cornerstones of U.S. policy aimed at helping to end the strife in a desperately impoverished country that has known little respite from war in decades. We also need an overall foreign policy based on building real security through international cooperation and human rights.

More war is still not the answer, and until fundamental changes are made in U.S. foreign policy —- an end to blank-check support for Israel, an end to U.S. occupation and military bases in Arab lands, an end to threats to Iran, an end to the chimera of the “global war on terror” (or whatever they call it now), an end to hypocrisy on nuclear proliferation, and concrete steps to address legitimate grievances in the Arab and Muslim world —- whatever we do in Afghanistan or Pakistan, short of a massive occupation that would be immoral and we can’t afford, is doomed to failure.

The president’s domestic economic agenda —- investing in resolving pressing problems on jobs, health care, education, housing and climate change —- is put at grave risk by our exorbitant (possibly over $3 trillion) and seemingly endless wars. We can’t afford to forgo the crucial investments we need to make our communities stronger. We simply can’t afford more war.

King observed in his “Beyond Vietnam” speech that the country’s commitment to a serious program of investment in human needs in the mid-1960s was “broken and eviscerated as if it were some idle political plaything of a society gone mad on war.”

Can we afford to look back in 40 years and say the same thing about Obama’s domestic program and his presidency?

King’s words still ring, chillingly, across four decades, “A nation that continues year after year to spend more money on military defense than on programs of social uplift is approaching spiritual death.”

Please join with us in calling for peace with justice, rather than an escalation of war. Join us in recognizing and acting on King’s “fierce urgency of now” as we “rededicate ourselves to the long and bitter, but beautiful, struggle for a new world.”

Leslie Cagan is national coordinator of United for Peace and Justice.
Posted by Paul B at 3:20:00 PM