The GOP: Divorced from Reality 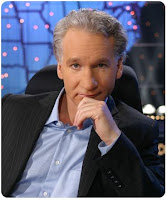 The Republican base is behaving like a guy who just got dumped by his wife.

By Bill Maher April 24, 2009
If conservatives don't want to be seen as bitter people who cling to their guns and religion and anti-immigrant sentiments, they should stop being bitter and clinging to their guns, religion and anti-immigrant sentiments.It's been a week now, and I still don't know what those "tea bag" protests were about. I saw signs protesting abortion, illegal immigrants, the bank bailout and that gay guy who's going to win "American Idol." But it wasn't tax day that made them crazy; it was election day. Because that's when Republicans became what they fear most: a minority.

The conservative base is absolutely apoplectic because, because ... well, nobody knows. They're mad as hell, and they're not going to take it anymore. Even though they're not quite sure what "it" is. But they know they're fed up with "it," and that "it" has got to stop.
Here are the big issues for normal people: the war, the economy, the environment, mending fences with our enemies and allies, and the rule of law.
And here's the list of Republican obsessions since President Obama took office: that his birth certificate is supposedly fake, he uses a teleprompter too much, he bowed to a Saudi guy, Europeans like him, he gives inappropriate gifts, his wife shamelessly flaunts her upper arms, and he shook hands with Hugo Chavez and slipped him the nuclear launch codes.
Do these sound like the concerns of a healthy, vibrant political party?
It's sad what's happened to the Republicans. They used to be the party of the big tent; now they're the party of the sideshow attraction, a socially awkward group of mostly white people who speak a language only they understand. Like Trekkies, but paranoid.
The GOP base is convinced that Obama is going to raise their taxes, which he just lowered. But, you say, "Bill, that's just the fringe of the Republican Party." No, it's not. The governor of Texas, Rick Perry, is not afraid to say publicly that thinking out loud about Texas seceding from the Union is appropriate considering that ... Obama wants to raise taxes 3% on 5% of the people? I'm not sure exactly what Perry's independent nation would look like, but I'm pretty sure it would be free of taxes and Planned Parenthood. And I would have to totally rethink my position on a border fence.
I know. It's not about what Obama's done. It's what he's planning.
But you can't be sick and tired of something someone might do.
Republican Rep. Michele Bachmann of Minnesota recently said she fears that Obama will build "reeducation" camps to indoctrinate young people. But Obama hasn't made any moves toward taking anyone's guns, and with money as tight as it is, the last thing the president wants to do is run a camp where he has to shelter and feed a bunch of fat, angry white people.
Look, I get it, "real America." After an eight-year run of controlling the White House, Congress and the Supreme Court, this latest election has you feeling like a rejected husband. You've come home to find your things out on the front lawn -- or at least more things than you usually keep out on the front lawn. You're not ready to let go, but the country you love is moving on. And now you want to call it a whore and key its car.
That's what you are, the bitter divorced guy whose country has left him -- obsessing over it, haranguing it, blubbering one minute about how much you love it and vowing the next that if you cannot have it, nobody will.
But it's been almost 100 days, and your country is not coming back to you. She's found somebody new. And it's a black guy.
The healthy thing to do is to just get past it and learn to cherish the memories. You'll always have New Orleans and Abu Ghraib.
And if today's conservatives are insulted by this, because they feel they're better than the people who have the microphone in their party, then I say to them what I would say to moderate Muslims: Denounce your radicals. To paraphrase George W. Bush, either you're with them or you're embarrassed by them.
The thing that you people out of power have to remember is that the people in power are not secretly plotting against you. They don't need to. They already beat you in public.
Bill Maher is the host of HBO's "Real Time with Bill Maher."
http://www.latimes.com/news/opinion/la-oe-maher24-2009apr24,0,927819.story
Posted by Paul B at 5:09:00 PM