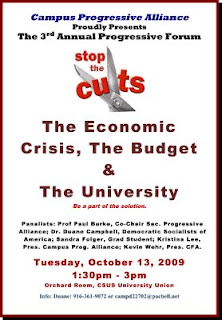 http://www.thedailyshow.com/watch/tue-september-29-2009/where-the-riled-things-are
Posted by Duane Campbell at 5:07:00 PM No comments:

Barack Obama at the AFL-CIO

The U.S. has failed to control Wall Street

For all Obama's talk of overhaul, the US has failed to wind in Wall Street

What went wrong? Have the right lessons been learned? Could it happen again? The anniversary of the Lehman Brothers' bankruptcy and the freezing of the credit markets that followed is an occasion for reflection. I fear that our collective response has been mistaken and inadequate – that we may just have made matters worse.

The financial sector would like us to believe that if only the Federal Reserve and the Treasury had leapt to the rescue of Lehmans all would have been fine. Sheer nonsense. Lehmans was not a cause but a consequence: a consequence of flawed lending practices, and of inadequate oversight by regulators.

Financial markets had lent on the basis of a bubble – a bubble in large part of their making. They had incentive structures that encouraged excessive risk-taking and shortsighted behaviour. And that was no accident. It was the fruit of vigorous lobbying, which strived equally hard to prevent regulation of changes in the financial structure, new products like credit default swaps – which, while supposedly designed to manage risk, actually created it – and ingenious devices to exploit poor and uninformed borrowers and investors. The sector may not have made good economic investments, but its political investments paid off handsomely.

Lehmans was allowed to fail, we were told at the time, because its failure did not pose systemic risk. The systemic consequences its failure entailed, of course, were used as an excuse for the massive bailouts for the banks. Thus the Lehmans example became at best a scare tactic; at worst it became an excuse, a tool, to extract as much as possible for the banks and the bankers that brought the world to the brink of economic ruin.

Had more thought gone into how to deal with Lehmans, the Treasury and Fed might have realised that it played an important role in the shadow banking system, and that it was important to protect the integrity of the shadow system which had come to play such an important role in the US and global financial payments system. But many of Lehmans' activities had no systemic importance. The administration could have found a path between the false dichotomy of abandonment or bailout. That would have protected the payments system, providing the minimum amount of taxpayer money. Shareholders and long-term bondholders would have been wiped out before any public money had to be put in.

Bailing out the US banks need not have meant bailing out the bankers, their shareholders, and bondholders. We could have kept the banks as ongoing institutions, even if we had played by the ordinary rules of capitalism which say that when a firm can't meet its obligations to creditors, the shareholders lose everything.

Unquestionably we should not have allowed banks to become so big and so intertwined that their failure would cause a crisis. But the Obama administration has created a new concept: institutions too big to be resolved, too big for capital markets to provide the necessary discipline. The perverse incentives for excessive risk-taking at taxpayers' expense are even worse with the too-big-to-be-resolved banks than they are at the too-big-to-fail institutions. We have signed a blank cheque on the public purse. We have not circumscribed their gambling – indeed, they have access to funds from the Fed at close to zero interest rates, and it appears that "trading profits" have (besides "accounting" changes) become the major source of returns.

Last night Barack Obama defended his administration's response to the financial crisis, but the reality is that a year on from Lehmans' collapse, it has failed to take adequate steps to restrict institutions' size, their risk-taking, and their interconnectedness. Indeed, it has allowed the big banks to become even bigger – just as it has failed to stem the flow of profligate executive bonuses. Obama's call on Wall Street yesterday to support "the most ambitious overhaul of the financial system since the Great Depression" is welcome – but the devil, as ever, will be in the detail.

There remain many institutions willing and able to engage in gambling, trading and speculation. There is no justification for this to be done by institutions underwritten by the public. The implicit guarantee distorts the market, providing them a competitive advantage and giving rise to a dynamic of ever-increasing size and concentration. Only their own managerial competence, demonstrated amply by a few institutions, provides a check on the whole process.

The Lehmans episode demonstrates that incompetence has a price. That there would be serious problems in our financial institutions was apparent since early 2007, with the bursting of the bubble. Self-deception led those who had allowed the bubble to develop, who had looked the other way as bad lending practices became routine, to think that the problems were niche or temporary. But after the fall of Bear Stearns, with rumours that Lehmans was next, the Fed and the Treasury should have done a serious job of figuring out how to manage an orderly shutdown of a large, complex institution; and if they determined that they lacked adequate legal authority, they should have requested it.

They appear, remarkably, to have been repeatedly caught off-guard. They claim in the exigency of the moment they were doing the best they could. There was no time for thought. And that explains how they veered from one solution to another: after saying that they did not want to bail out Lehmans because of a concern about moral hazard, they extended the government's safety net further than it had ever been. Bear Stearns extended it to investment banks, and AIG to all financial institutions. Perhaps they were doing the best they could at the time; but that is no excuse for not having anticipated the problems and been better prepared.

Lehman Brothers was a symptom of a dysfunctional financial system and regulatory failure. It should have taught us that preventing problems is easier, and certainly less costly, than dealing with them when they become virtually intractable.
Joseph Stiglitz is a Nobel Prize winning U.S. economist
Posted by Duane Campbell at 9:51:00 AM No comments:

Who is Van Jones and why was he fired?

Petition for those who worked and supported the campaign.
Please sign the petition. 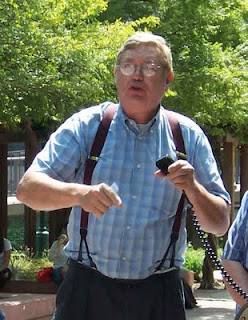 Protestors included students, faculty and staff of the university. The rally and two days of informational picketing was organized by the California Faculty Association (SEIU/NEA). They were joined by Bill Camp, Executive Secretary of the Sacramento Central Labor Council, Duane Campbell of DSA and the Progressive Alliance, Mecha, the Associated Students, and others.
Polls show that a majority of California voters reject draconian cuts to education. The CFA proposes a new tax on oil extraction to fund the universities, but they have been unable to pass the necessary legislation where a 2-3 vote is required to raise taxes. During the February California budget crisis corporations were able to get an additional $2.5 billion tax decrease.
Posted by Duane Campbell at 5:00:00 PM No comments: