US Yet to sign Treaty on Rights of the Child - Unesco

Why California Students Do Not Understand Chicano/Latino History.

Dr. Duane Campbell, BMED (emeritus) has been organizing testimony to change the History/Social Science Framework for California Schools.  The current Framework was written in 1987 and ignores Chicano/Latino history and Asian history. State Frameworks control the writing and the  selection of textbooks in California.  The Framework was scheduled to be revised in 1994, 2000, and 2007, but it was not.

This story is told in Choosing Democracy: a practical guide to multicultural education, 2010,(Allyn And Bacon)   now in its 4th. edition by Duane Campbell with co-authored sections by a number of  faculty in BMED.  This  willful refusal to include Chicano/Latino and Asian history is a continuing  example of cultural imperialism.

Dr. Campbell will speak on the current status of the Framework, on California  textbook adoption , curriculum development, on multicultural education and the role of the university in challenging ideological hegemony.  Co authors of the book will be present to respond to questions.

Light refreshments will be served.

Quality public education for all: California

We've got to stop cutting public education. To ease the budget crisis, one state after another is taking an ax to higher education. This is cruel and shortsighted.


Cruel because it denies students the right to a decent education. Shortsighted because how will this generation of students get prepared to compete globally or even to clean up the financial mess brought about by Wall Street?

I'm a product of the worst and best public education California has to offer. I grew up in an East Los Angeles housing project in the 1970s and 1980s. I attended overcrowded public schools in the inner city. Like many racial minorities from America's barrios and ghettos, I received an inadequate education.

While I excelled in mathematics, I was never taught to read or write at a competent level throughout my K-12 schooling. To complicate matters, the longest paper assigned to me in high school was two pages long.

I taught myself how to properly read and write while going through college to compensate for my poorly funded K-12 education. But what will happen to those without this same self-drive that I learned from my Mexican immigrant mother? Fortunately, I also benefited from affirmative action and from numerous educational outreach programs and policies like Occident College's Upward Bound - a preparatory program for students from disadvantaged communities.

So I worry about those who grow up in poor neighborhoods without the same educational safety nets that allowed for me to attend some of the best universities in this country. I can't help but be concerned about the plight of my wife's elementary school students in East Los Angeles today.

Those who fight affirmative action and against government-sponsored early educational outreach programs conveniently wash their hands of any responsibility toward those who lack the financial resources and access to human capital to go to college.

And fewer and fewer have those resources, with one state after another raising tuition and other fees. These fee hikes couldn't come at a worse time.

If we care about equality of opportunity, if we are concerned about our ability to compete in the global economy, it's time to give everyone, including those from America's barrios and ghettos, a shot at a great public education. 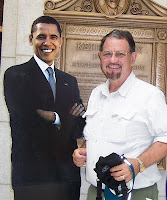 Lou Dobbs, the longtime CNN anchor whose anti-immigration views have made him a TV lightning rod, said Wednesday that he is leaving the cable news channel effective immediately.

Sitting before an image of an American flag on his television set, he said “some leaders in media, politics and business have been urging me to go beyond the role here at CNN and to engage in constructive problem solving as well as to contribute positively to the great understanding of the issues of our day.”

“I’m considering a number of options and directions,” Mr. Dobbs added. A transcript of his remarks is available here.

Jonathan Klein, the president of CNN/U.S. said in a statement that “Lou has now decided to carry the banner of advocacy journalism elsewhere.”

“All of us will miss his appetite for big ideas, the megawatt smile and larger than life presence he brought to our newsroom,” Mr. Klein said.

What happened when women Democrats tried to protect women's right to health care ?


Schultz is the author of Spectacular Things Happen Along the Way: Lessons from an Urban Classroom. A panel discussion by candidates for California State Superintendent of Public Instruction will follow Shultz’ talk. The rest of the day will be filled with 30 break-out sessions on a range of topics including Peace and Conflict Resolution, Technology Integration and Anti-Bias Media Analysis, and Impact of Educational Reform Polices on English Learners.

For more information or to register for the conference, visit www.edweb.csus.edu/bmed, e-mail Maggie Beddow at beddow@csus.edu, or call the BMED Office at (916) 278-5942.