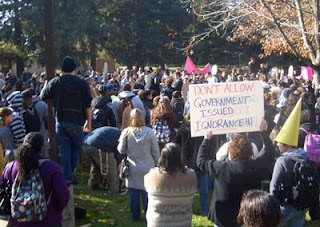 There was a different kind of mourning today at the Library Quad. It was loud and people are angry.

About 300 students and faculty, many of whom were dressed in black, gathered in a mock funeral to symbolically mourn what they call the death of higher education. As they marched, they yelled "They say cut back, we say fight back!"

"We demonstrate today as the start to the student movement to tell California that you invest in us because we matter," said Associated Students, Inc. President Roberto Torres.

Senior government major Robert Graham said the protest, which was organized by the Sac State Coalition, is aimed at the legislators, the Board of Trustees, California State University Chancellor Charles Reed and Sacramento State President Alexander Gonzalez.

"What were looking to accomplish is bring media attention both to Sac State and get the students just aware that there's a movement starting that's not going to stop until we get what we want, until we get our money back," said Rylan Gervase, sophomore government international relations major and ASI secretary of state affairs.

Senior psychology major Corin Ramos, who wore face paint with a skull design, said her classes are "very full" and a lot of her part-time professors are being laid off.

"It's very hard to make a relationship with the professor, to even have them know your name because the classes are so huge," Ramos said. "There are so few classes available this semester and that's not right, but the CSU knows exactly what they're doing when they do this."

After the rally at the Library Quad, the protesters marched around campus shouting and chanting, carrying a coffin filled with notes that had student complaints on them. Students also held cardboard tombstones with concerns written on them, such as "R.I.P graduation rates."

The march ended in front and inside Sacramento Hall where the administration offices are located.

Graham said Gonzalez, who did not make an appearance during the protest, should issue a response.

"If he doesn't make a press release statement about this, I think people are going see that he just sits in his office," Graham said.

Kristine Guerra can be reached at kguerra@statehornet.com.