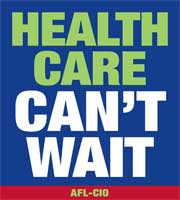 The health care bill being considered by the U.S. Senate is inadequate and too tilted toward the insurance industry, AFL-CIO President Richard Trumka said today.

Trumka said the top priority now is to fight over the rest of the legislative process to fix the bill and make sure we can pass real health care reform:

The labor movement has been fighting for health care for nearly 100 years and we are not about to stop fighting now, when it really matters. But for this health care bill to be worthy of the support of working men and women, substantial changes must be made. The AFL-CIO intends to fight on behalf of all working families to make those changes and win health care reform that is deserving of the name.

Genuine health care reform must bring down health costs, hold insurance companies accountable, assure that Americans can get the health care they need and be financed fairly.

While the Senate’s bill makes a lot of important and necessary changes to our health care system, it falls short in three key areas, Trumka says.

It doesn’t have to be this way. The bill passed by the U.S. House is far better than the Senate’s bill on these and other measures. The House bill finances health care through a small tax on the very wealthiest of earners—those who reaped vast benefits from the Bush tax cuts—and it includes a public health insurance plan and real responsibility for employers. Trumka says:

The House bill is the model for genuine health care reform. Working people cannot accept anything less than real reform.