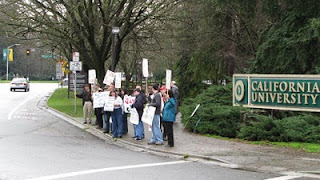 Sac State Students and Faculty protest Jan.25-26,2010.
News article.
At 2:29 p.m. on Jan. 12, Juan Macias, 19, a sophomore at San Francisco State University, sat in a cafe near the engineering firm where he works part time as an office assistant, staring at a laptop computer screen.

In one minute he would get a crucial opportunity to register for classes for the spring semester. “This is so nerve-wracking," he said as he waited for the clock to signal that his assigned registration period had begun.

Hours earlier, scrutinizing the class schedule, he considered about 30 courses — then had to rule all of them out. They were full. The last slot on the waiting list for a 146-seat introductory physics class he has been trying to join for a year had disappeared minutes before, taken by another student with an earlier registration period.

“You’re trying to compete with all the other students, when we all want education,” said Mr. Macias, a business major. “It really makes me angry.” His classes — the ones that had an opening — begin on Monday.

Welcome to state-run higher education in California. Mr. Macias is just one of more than 26,000 students at San Francisco State, and now educational opportunities cost more and are harder to grasp and even harder to hold onto than ever before. Mr. Macias’s experience of truncated offerings, furloughed professors and crowded classrooms is typical.

In 1960, he added, the state created “the gold standard in high-quality, low-cost public higher education. This year, the California legislature abandoned the gold standard.”

Because of state budget cuts to higher education, San Francisco State is now offering 3,173 course sections, 12 percent fewer than two years ago. From the university administration’s point of view, that is not as bad as it might have been: over $1.5 million in federal stimulus money prevented more draconian cuts.

The cutbacks enraged students. On Dec. 9, Mr. Macias was among the student activists who occupied the campus’s Business Building for 24 hours, canceling the classes held inside, including one he was taking. With a red sweater partially obscuring his face, he took to the roof with 11 other protesters, wielding a megaphone and leading chants.

When police broke up the occupation early the next morning, Mr. Macias, who had never participated in a protest before he went to San Francisco State, was arrested. On Jan. 26 he will go to court.

The chaos of trying to get into classes last fall spurred Mr. Macias. After budget cuts forced class cancellations, he had to take a week off work to attend 20 classes, as he tried to scrounge up enough units to keep his full-time status and maintain his financial aid.

Mr. Macias also felt the cuts in the classroom. In the fall, Don Menn, a lecturer in the journalism department since 1999, had taken pity on many students who, like Mr. Macias, were seeking to join his introductory course, Journalism and Mass Media. He let them all in, teaching 190 in a lecture hall that seats 148. Some sat on the floor.

But with no budget for a teaching assistant to help with grading, Mr. Menn had to slash the syllabus, canceling the midterm exam and the 10-page research paper. While in the past he had frequently given essay tests, this year all quizzes and the final were multiple choice.

“This is supposed to be a critical-thinking type class,” Mr. Menn said, “and here it was rote learning.”

Next year, students like Mr. Macias may face a further increase in fees. Gov. Arnold Schwarzenegger’s proposed budget for 2010-11 includes a 10 percent fee increase for students at the California State University’s 23 campuses. He also proposed restoring $305 million to the state university system.

Mr. Macias’s education has already suffered. “Just worrying about having enough units to stay in school made me lose focus on my schoolwork,” he said.

Read the entire piece at;

There will be protest demonstrations at Sac State on Monday and Tues,  8- 10 Am.