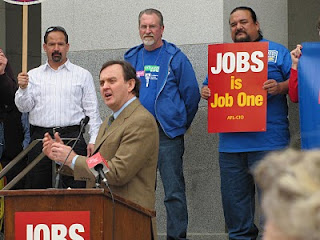 Over 400 workers, many of  them now unemployed,  marched  on the California State Capitol  for a a Jobs Now rally in Sacramento California today, Feb. 11.   The major chant was Jobs ! Jobs! Jobs!
Darrell Stienberg, Senate Pro temp California State Senate and numerous other speakers  called for the ending of the 2/3 vote rule in the California legislature as a means of building a progressive budget.
Richard Trumka, President of the AFL-CIO was to have been there, but the snow storm in the east kept him from attending.
Bill  Camp; Executive  Secretary of the Sacramento Central labor Council focused the issue,  “The Banks have received millions /billions in bailouts.  When  in the hell are they going to give a bailout to the working class?”
U.S. Representative John Garamendi  said,  “Wall street took the entire economy into the tank. And, they got a bail out.  We want the money back. “
Garamendi said that the House has passed a $120 Billion for Jobs for Main Street bill but it is being held in the U.S. Senate by the consistent use of the filibuster by the Republicans Senators with the support of 4-6 Democratic Senators.  Congressman Garamendi called for pressure on the Senate to pass the bill – with 51 votes.
For more see the California Labor Federation.  Here; http://www.calaborfed.org/
Posted by Duane Campbell at 8:38:00 PM