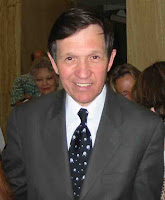 Published on Wednesday, March 17, 2010 by CommonDreams.org
Why I'm Voting 'Yes'
by Dennis Kucinich

The following are the prepared remarks offered by US Rep. Kucinich today regarding his plans for the upcoming health care vote:

Each generation has had to take up the question of how to provide for the health of the people of our nation. And each generation has grappled with difficult questions of how to meet the needs of our people. I believe health care is a civil right. Each time as a nation we have reached to expand our basic rights, we have witnessed a slow and painful unfolding of a democratic pageant of striving, of resistance, of breakthroughs, of opposition, of unrelenting efforts and of eventual triumph.
I have spent my life struggling for the rights of working class people and for health care. I grew up understanding first hand what it meant for families who did not get access to needed care. I lived in 21 different places by the time I was 17, including in a couple of cars. I understand the connection between poverty and poor health care, the deeper meaning of what Native Americans have called "hole in the body, hole in the spirit". I struggled with Crohn's disease much of my adult life, to discover sixteen years ago a near-cure in alternative medicine and following a plant-based diet. I have learned with difficulty the benefits of taking charge personally of my own health care. On those few occasions when I have needed it, I have had access to the best allopathic practitioners. As a result I have received the blessings of vitality and high energy. Health and health care is personal for each one of us. As a former surgical technician I know that there are many people who dedicate their lives to helping others improve theirs. I also know their struggles with an insufficient health care system.

I have carried the banner of national health care in two presidential campaigns, in party platform meetings, and as co-author of HR676, Medicare for All. I have worked to expand the health care debate beyond the current for-profit system, to include a public option and an amendment to free the states to pursue single payer. The first version of the health care bill, while badly flawed, contained provisions which I believed made the bill worth supporting in committee. The provisions were taken out of the bill after it passed committee.

I joined with the Progressive Caucus saying that I would not support the bill unless it had a strong public option and unless it protected the right of people to pursue single payer at a state level. It did not. I kept my pledge and voted against the bill. I have continued to oppose it while trying to get the provisions back into the bill. Some have speculated I may be in a position of casting the deciding vote. The President's visit to my district on Monday underscored the urgency of this moment.

I have taken this fight farther than many in Congress cared to carry it because I know what my constituents experience on a daily basis. Come to my district in Cleveland and you will understand.

The people of Ohio's 10th district have been hard hit by an economy where wealth has accelerated upwards through plant closings, massive unemployment, small business failings, lack of access to credit, foreclosures and the high cost of health care and limited access to care. I take my responsibilities to the people of my district personally. The focus of my district office is constituent service, which more often then not involves social work to help people survive economic perils. It also involves intervening with insurance companies.

In the past week it has become clear that the vote on the final health care bill will be very close. I take this vote with the utmost seriousness. I am quite aware of the historic fight that has lasted the better part of the last century to bring America in line with other modern democracies in providing single payer health care. I have seen the political pressure and the financial pressure being asserted to prevent a minimal recognition of this right, even within the context of a system dominated by private insurance companies.

I know I have to make a decision, not on the bill as I would like to see it, but the bill as it is. My criticisms of the legislation have been well reported. I do not retract them. I incorporate them in this statement. They still stand as legitimate and cautionary. I still have doubts about the bill. I do not think it is a first step toward anything I have supported in the past. This is not the bill I wanted to support, even as I continue efforts until the last minute to modify the bill.

However after careful discussions with the President Obama, Speaker Pelosi, Elizabeth my wife and close friends, I have decided to cast a vote in favor of the legislation. If my vote is to be counted, let it now count for passage of the bill, hopefully in the direction of comprehensive health care reform. We must include coverage for those excluded from this bill. We must free the states. We must have control over private insurance companies and the cost their very existence imposes on American families. We must strive to provide a significant place for alternative and complementary medicine, religious health science practice, and the personal responsibility aspects of health care which include diet, nutrition, and exercise.

The health care debate has been severely hampered by fear, myths, and by hyper-partisanship. The President clearly does not advocate socialism or a government takeover of health care. The fear that this legislation has engendered has deep roots, not in foreign ideology but in a lack of confidence, a timidity, mistrust and fear which post 911 America has been unable to shake.

This fear has so infected our politics, our economics and our international relations that as a nation we are losing sight of the expanded vision, the electrifying potential we caught a glimpse of with the election of Barack Obama. The transformational potential of his presidency, and of ourselves, can still be courageously summoned in ways that will reconnect America to our hopes for expanded opportunities for jobs, housing, education, peace, and yes, health care.

I want to thank those who have supported me personally and politically as I have struggled with this decision. I ask for your continued support in our ongoing efforts to bring about meaningful change. As this bill passes I will renew my efforts to help those state organizations which are aimed at stirring a single payer movement which eliminates the predatory role of private insurers who make money not providing health care. I have taken a detour through supporting this bill, but I know the destination I will continue to lead, for as long as it takes, whatever it takes to an America where health care will be firmly established as a civil right.

Rep. Dennis Kucinich is a Democratic Congressman from Ohio.
Posted by Paul B at 1:10:00 PM