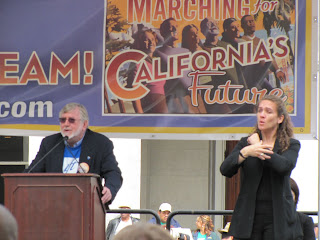 Over 8,000 teachers and other public workers  demonstrated in support of  the March for California’s Future  at the State Capitol in Sacramento on April 21.  Eight  marchers  walked over 300 miles in 48 days to demand that schools and public services be adequately funded.   California Federation of Teachers President Marty Hittelman said, since 1992, the top 1% of California income earners – people who average $1.6 million per year, have doubled their share of the state’s income from 13 percent to 25%.  At the same time, this group has had its income tax rates reduced.
Revenue shortages in California have led to the lay off of some 14,000 teachers, school closures, and cuts in social services.   Lost tax revenue due to loopholes for the rich and large corporations is costing the state’s general fund billions.  For example, California does not have a law to tax oil companies for taking oil from the ground, a major source of revenue for Alaska and Texas.
Unfortunately the Sacramento Bee hardly covered this.  One photo and a paragraph. Less information than given here. But the thousands were there.  It had rained earlier in the day so I guess the Bee did not want their reporters to get wet.  Instead, they sat inside the capitol and covered politicians. This was among the three major labor/education marches this Spring.
Posted by Duane Campbell at 8:09:00 PM