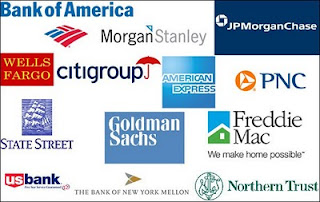 No More Gambling with Taxpayer Money!

Let's Get the Job Done, Help Us Whip the Conferees!

The House-Senate banking conference committee is underway in Washington, D.C. If you are a nut like me, you will want to watch on C-Span. But even if you are not, you can still have boatloads of Bankster fun by helping us whip the conferees! We are making progress, Fed Presidents across the land are supporting Lincoln, along with top economists, the New York Times editorial board and even Paul Volcker, who apparently changed his mind. With your help we can win this!

Reckless swaps and derivatives trading played a critical role in the financial crisis, inflating the domestic housing bubble and turning it into a global economic catastrophe. As the House and Senate conference committee begins final work on the financial services reform bill it is critically important to preserve the strong language cracking down on those “financial weapons of mass destruction” contained in the Senate bill. Nobel prize-winning economist Joseph Stiglitz makes the case for Senate derivatives chapter plainly" “If [Congress] fails to pass strict oversight of dangerous over-the-counter derivatives and swaps the U.S. economy will continue to be vulnerable to significant financial risk.”

Currently the five largest banks in the United States have an anti-competitive strangle-hold on 90 percent of the U.S. swaps and derivatives market worth some $300 trillion. The five banks are Goldman Sachs, Morgan Stanley, JP Morgan Chase, Citigroup and Bank of America. These five bank-dealers can fund their swaps trading units with FDIC-insured deposits. They have access to the Federal Reserve's discount window, which allows them to borrow money for gambling in swaps at near-zero percent interest rates. But these government supports were created to reassure the public that their deposits are safe, and to protect banks from runs on their deposits –- not to help banks finance their own casinos.

Play with Your Own Money, Not Ours

Sec. 716 of the Senate bill contains a ban on federal government assistance to any swap entity. In effect, Sec. 716 will require the five largest banks/swaps dealers to spin off their swaps desks into a separately capitalized affiliate – in other words to Wall off the casino from old fashioned banking. The measure is geared entirely towards preventing a situation in which taxpayers would once again be liable for the bad bets of big banks. Sec. 716 would ensure that private sector institutions alone are responsible for these risky trades.

While the Senate derivatives chapter is supported by leading economists and reform advocates including Jospeh Stigliz, Nouriel Roubini, Simon Johnson, Robert Johnson, Dean Baker, advocates like Americans for Financial Reform, small American banks and even a large number of international bank analysts, it is not supported by the Obama administration or Congressional leaders. It is also the top target of the 2,500 bank lobbyists swarming Capitol Hill. Since these powerful provisions are already in the bill, thanks to the efforts of Senate Agriculture Committee chair Blanche Lincoln (D-Ark.), they will have to be stripped out with a public vote. Democratic leaders like Senator Chris Dodd (D-Conn.) and Barney Frank (D-Mass.) are in the awkward position of needing to gut the reform package that they are touting as the strongest since the New Deal era. They are hoping to do this gracefully and are working on a bad compromise to buy off critics.
Why does this matter?
What caused this crisis?
The nation  including California is suffering a severe recession.  Twenty Six million  are unemployed and under employed. This crisis was created by finance capital and banking, mostly on Wall Street ,ie. Chase Banks, Bank of America, AIG, and others.   Finance capital produced a $ 2 trillion bailout of the financial industry, the doubling of America’s unemployment rate and the loss of 2 million manufacturing jobs in 2008.  Fifteen million people are out of work.  You and I, and college students did not create this crisis.  Finance capital stole the future of many young people.
Paul Krugman, The return of depression economics and the crisis of 2008.  (2009)
Dean Baker,  Plunder and Blunder: The Rise and Fall of the Bubble Economy, (2009)
Nomi Prins.  It Takes a Pillage: Behind the bailouts, bonuses and backroom Deals from Washington to  Wall Street. (2009)
Joseph E. Stiglitz.  Free Fall, America, Free Markets, and the Shrinking World Economy.  2010.
William Grieder,  The Soul of Capitalism: Opening Paths to a Moral Economy. (2003).
Justin Fox,  The Myth of the Rational Market: a history of risk, reward, and delusion on Wall Street. (2009)
Jeff Faux, The Global Class War: How America’s Bipartisan Elite lost our Future- and what it will take to win it back. ( 2006)
Web resources.
United for a Fair Economy.  http://www.faireconomy.org
Center for Economy Policy Research
Posted by Duane Campbell at 6:49:00 PM