NAACP prepares for ‘One Nation’ march 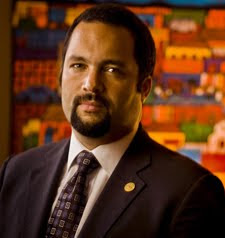 Activists look to press case against tea party racism
Published Friday, July 23, 2010 10:04 am
by Hazel Trice Edney, NNPA
WASHINGTON – On the heels of the NAACP’s call for an end to the racist wing of the political tea party movement, the organization pushed forward this week with plans for a national march and rally in D.C. on October 2.

“We have to celebrate this victory,” NAACP President Ben Jealous said in a brief telephone interview with the NNPA News Service on Monday. “People are now depressed and they need signs of light and signs of strength. And the fact that we just got the tea party to push out an entire faction of the Tea Party because of racism is something that needs to be noted.”

Jealous was referring to the fact that the controversial National Tea Party Federation announced that it has expelled Mark Williams, the former chairman and spokesman of Tea Party Express, for his satirical letter from a “colored” person to President Abraham Lincoln in which slavery was called a “great gig.”

The expulsion – in response to Jealous denouncing the racism within the tea party during his NAACP Convention speech last week - was announced Sunday by David Webb, a representative of the National Tea Party Federation, as he debated with Jealous on CBS’ "Face the Nation."

Aside from announcing the expulsion on the program, Webb tried to fire back, accusing Jealous of having “selective condemnation” of racism while not condemning the New Black Panther Party for statements against Whites. Jealous was quick to say that the NAACP unequivocally condemned racist or hateful statements by the Panther group. But he also pointed out that the NBPP is not a part of the NAACP like the Tea Party Express known for extreme racial overtones, graphics and epithets expressed by its members – especially against the Obama administration.

The spillover from last week’s NAACP Convention in Kansas City, Mo., which continued to smolder this week, will no doubt continue. But, Jealous has already shifted directions as he prepares to lead a massive “One Nation” march Oct. 2.

“We had a big planning meeting on Sunday with several organizations. People are very excited. The march is part of the broader civic engagement strategy to make sure we hold the people that they’ve elected accountable and making sure we get all the change that we voted for, including job creation,” Jealous said.

He described how after the Obama inauguration on Jan. 20, 2009, “all the major groupings of human and civil rights organizations moved off into different directions.”

There were a series of victories like the stimulus package and the Ledbetter Act for fair pay for women. But, a year later with the health care bill, civil and human rights groups were forced to fight together again. And as the months wore on, it became increasingly clear that racism in America had intensified since the warm and fuzzy inaugural day.

The banner for the march is “One Nation.” The tag line is “Working Together” he said. It will be a mass gathering of civil and human rights organizations, but also grassroots citizens from every walk of life, religion and race, he said.

That message was lost after his convention speech last Monday due to media frenzy over his tea party comments that came in the same speech. But, during the address, the largely youth audience applauded the message and has now dispersed to organize the nation for Oct. 2.

“The NAACP is ready to lead this country in a revival of its soul, and we are ready to breathe the fighting spirit of the NAACP into the ‘dry bones’ all around us,” Jealous said in the speech.

Describing a string of recent racial injustices across the nation; including the pains of economic depression and joblessness, Jealous was clear in his call to action.

“This is why we are calling for a great march on Washington on 10-2-10. The NAACP, along with allies and partners, will show America that the solid majority of this nation is ready and willing to fight back and ensure that all of the change we voted for is reality for all of our children,” he told the cheering crowd. “That ‘America the Beautiful’ belongs to us. And that justice and freedom keeps moving forward.”

He was also clear that the march will not be a simple exercise in emotion, but aimed to rally voters to the polls in November and reviving the NAACP.

“We will be in Washington on 10-2-10 and we will be at the ballot box on 11-2-10,” he said. “Breathing new life in to our communities - reviving America again…and truly realizing the promise of one nation, one dream…will require that we continue doing the hard work of breathing new life into the NAACP.”
Posted by Paul B at 1:03:00 AM

We learned this morning that the National Executive Council of the AFL-CIO has voted to support and mobilize its members for the October 2, 2010, march on Washington to demand "jobs, economic security, comprehensive immigration reform, a safe and renewable energy policy and a reversal of national priorities from making wars to meeting human needs." This march was initiated by SEIU Local 1199 and the NAACP.

NAACP President Ben Jealous announced the October 2 march at the NAACP convention in Kansas City in early July, explaining that "marchers will demand the change they voted for when Barack Obama was elected," and emphasizing the urgent need to "create jobs and stop moving money out of education and into wars and prisons." (Kansas City Star, July 12, 2010)

You have the change and the President you voted for. You are being led by the leaders you voted for.
MAYBE you should take a look at WHO and WHAT you voted for if you don't like what you got in return for your vote.