One Nation Working Together California Announces Plans for Massive Rallies in L.A. and Oakland on October 2nd 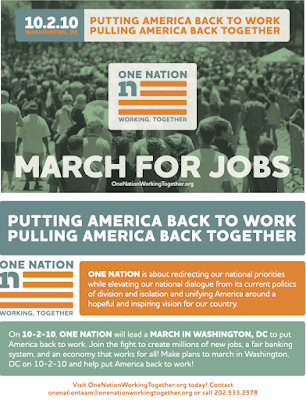 LOS ANGELES, Sept. 9 /PRNewswire/ -- Heeding a call to restore opportunity for Americans and pull America back together, tens of thousands of individuals and organizations across the U.S. have united as One Nation Working Together for jobs, justice, and education. One Nation Working Together (ONWT) is a fast-growing grassroots movement of people from all backgrounds united by the goal of reordering our nation's priorities to invest in our most valuable resource – our people. Today, the California arm of ONWT announced its plans for re-energizing voters for this November's election cycle and to call for an end to divisive tactics that are being used to polarize – not unite - America.

"We're here today to announce the California plans for One Nation Working Together - a grassroots movement that will fight for a future that presents opportunities to our students and unemployed, that regains the hope we held so proudly in 2008, that redefines the future, and moves our country forward," said Laphonza Butler, President of SEIU ULTCW (United Long Term Care Workers' Union).

One Nation Working Together is a national movement comprised of more than 150 organizational partners and tens of thousands of individuals including human and civil rights organizations, activists, unions and trade association, nonprofit organizations, youth and student groups, religious and other faith groups, education, peace, environmental, ethnic associations, and others committed to the future of our country.

Based on the belief that everyone deserves the opportunity to achieve the American Dream of having a secure job, a safe home and a quality education, ONWT will provide a structure by which people who care about the state of our government, our jobs and our economy can speak out and take action together.

"For me, the One Nation Working Together movement is about regaining our core values – values that are based on fact and realities. Not based on hate, fear and poll-inflamed rhetoric," said Reverend K.W. Tulloss of National Action Network and Pastor of Weller Street Baptist Church.

Over the next few months, ONWT California will be planning a massive action to re-energize voters for the November election while continuing to raise awareness of its mission both locally and statewide.

"Our activities in California will lead up to a large-scale rally in Los Angeles and in Oakland on October 2 where thousands will share their commitment to the future of our country and our state," said Angelica Salas, Executive Director of Coalition for Humane Immigrant Rights of Los Angeles (CHIRLA). "A key part of the October 2 rally in California will include taking to the streets and going door-to-door with the goal of connecting with over 100,000 voters that day – encouraging them to exercise their right to vote in November and informing them of how to be involved in this election season."

While thousands gather in Los Angeles and in Oakland on October 2, 2010, to send a clear message that Californians are standing united for change, an estimated half million will be gathering in Washington DC at the Lincoln Memorial.

One Nation Working Together California also announced that it will be sending a group of Californians to Washington DC for the national rally via RV. The journey across America is scheduled to depart Los Angeles on September 24 and will give participants the opportunity to meet fellow Americans along the way and blog about their experience. Anyone interested in participating is invited to apply online at www.OneNationCA.org.


SOURCE One Nation Working Together California
http://onenationca.org/
Posted by Paul B at 2:15:00 AM

Email ThisBlogThis!Share to TwitterShare to FacebookShare to Pinterest
Labels: One Nation Working Together California