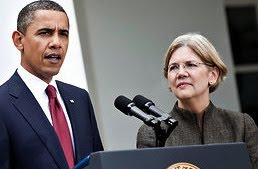 The question now is whether Warren, a consumer champion, will wield the full power afforded that agency to crack down on Wall Street swindlers and speculators.

The answer to that question will tell us a lot about Obama's commitment with regard to critical economic fights, and about the ability of progressives to influence the administration.

Right now, the jury is still out.

Obama has been looking a little more focused and functional of late, talking about the need to invest in infrastructure projects to create jobs and rejecting Republican calls for the extension of George W. Bush's tax cuts for the rich.

Yet, for those who thought Obama was starting to "get" that America wants a president who will stand up to the economic royalists and do the right thing, his failure appoint Warren to head the bureau is unsettling.

Obama has named the hero of reformers – and the one person anywhere near the upper echelons of this administration that Wall Street fears -- to an advisory post where she will report to Treasury Secretary Timothy Geithner. Congress placed the bureau's powers within the Treasury Department until such time as a permanent director is appointed and confirmed by the Senate to a five-year term. But Geithner has never been seen as an advocate for the agency. And, despite some complimentary public statements regarding Warren [1] by the treasury secretary, it has been broadly suggested that he has been a behind-the-scenes opponent of her appointment to head the bureau. [2]

Warren will also report to Obama—as a presidential assistant—and White House aides say that she will play a significant role in helping to create the consumer agency that is supposed to make real the promises made in the vague financial regulatory overhaul legislation passed earlier this year. Perhaps that will be the case.

Certainly, groups such as MoveOn.org are trying to put the best spin on the decision.

Hailing Obama's decision as "Great News!" Move On says: "This is the boldest step Obama's taken so far to rein in the big Wall Street banks. And it's a major victory for grassroots progressives who rallied for Warren. The banks fought to keep her out of this job—and now that she has it, they'll do whatever they can to keep her from exercising her full authority. That's why we need to get the word out—to make sure she has the grassroots support she needs to aggressively police Wall Street."

Implicit in the last line of of the statement is a concern that Warren may ack the authority to aggressively police Wall Street.

I prefer the edgy response of Adam Greene, the co-founder of the Progressive Change Campaign Committee, [3] who noted that: "The White House is being coy about Warren's role... The fact is that Warren will functionally have the keys to the new bureau for it's opening months, giving her immense opportunity to craft it the right way -- and giving President Obama a brief honeymoon on this issue with progressives through the election. It's still completely on the table that she'd be given a permanent appointment, and if the Wall Street types in the White House tried to stab her in the back and give someone else that role, there'd be hell to pay with progressives. That would be a really stupid move right as the president gears up his own re-election."

Obviously, the high hope is that Warren is on track for the actual appointment that Oregon Senator Jeff Merkley and others are urging him to make.

"While this is good news for American families," the reform-minded senator says, "it is my hope that President Obama will nominate Warren to a permanent position to head up the CFPB. She is more than deserving of the job and the Senate should have the opportunity to confirm one of the nation's strongest consumer advocates. The CFPB has been tasked by Congress with reining in the abuses by payday loan firms, credit card companies and predatory mortgage lenders that have stripped families of their hard-earned wealth and were a key cause of the recent financial crisis and recession. Clearly, the new bureau has a big job to do, and Elizabeth Warren is the right person to do it."

Unfortunately, the right person will not be doing it for awhile. As such, Obama is avoiding a fight that he should be waging.

By failing to formally install Warren in the position that economists and activists say she is uniquely prepared to fill, Obama is missing one of the most important opportunities of his presidency.

Warren should not be reporting to Geithner, whose subservience to Wall Street has done severe damage to the administration's ability not just to the correct the course of the economy but to crystallize financial issues that continue to play an essential role in our politics.

Indeed, if Obama were serious about tipping the balance away from Wall Street and toward Main Street, he would replace Geithner with Warren.

That's too much to ask of this administration.

But it should not be too much to ask that Warren be given the job she conceived and campaigned to create.

The president could have appointed Warren to head the Consumer Financial Protection Bureau and dared the Senate to reject a woman who has become the face of the fight to hold big banks, credit card companies and speculators to account. If Republicans threatened to block her appointment, they would have clarified the question of which party is working for Wall Street and which party is on the side of Main Street.

Or, if he really feared a filibuster would have prevented Warren from getting to the vital work of creating a muscular consumer protection agency, Obama could have made a recess appointment [4] and put her in the position immediately. His critics would surely have screamed about Obama moving too aggressively to, um, protect consumers from being ripped off by Wall Street profiteers—a complaint that the president and his party would have been wise to invite.

Progressive campaigned for a recess appointment [5], arguing that such a move could have helped to close the enthusiasm gap that Democrats fear will make it hard to get base voters to the polls this fall. The Progressive Change Campaign Committee [3] had even highlighted the differences between Warren and Geithner, arguing in petition language that: "Elizabeth Warren has proven that she is willing to stand up to Wall Street on behalf of consumers and is the logical choice to lead the Consumer Financial Protection Bureau. Tim Geithner is a longtime Wall Street insider, and if he's recommending against Elizabeth Warren that's all the more reason to appoint her."

Instead, by making Warren an "assistant," Obama runs away from the fight—and gives up another chance to clarify the economic battle lines not just of the fall campaign but of his presidency.

Progressives should be concerned, for political and policy reasons.

And they should keep the pressure on the administration to make real the promise of reform by formally appointing Elizabeth Warren to head the Consumer Financial Protection Bureau.

John Nichols is Washington correspondent for The Nation and associate editor of The Capital Times in Madison, Wisconsin. A co-founder of the media reform organization Free Press, Nichols is is co-author with Robert W. McChesney of The Death and Life of American Journalism: The Media Revolution that Will Begin the World Again [6] and Tragedy & Farce: How the American Media Sell Wars, Spin Elections, and Destroy Democracy [7]. Nichols is also author of Dick: The Man Who is President [8] and The Genius of Impeachment: The Founders' Cure for Royalism. [9]
Posted by Paul B at 1:48:00 PM