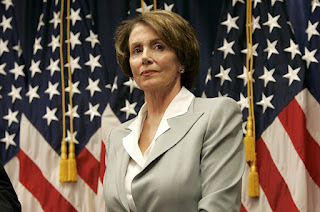 [Editor's Note: Give 'em hell Nancy! Progressives have your back.]

House Speaker Nancy Pelosi is calmly assessing the political cyclone that routed her Democratic majority and will, at least temporarily, force her to vacate one of the best offices in the city, with its inspirational view of the Washington Monument and the Lincoln Memorial.

She keeps coming back to the courage of her colleagues who cast hard votes that helped make the past two years one of Congress's most productive periods in recent times - and made her one of the most effective speakers in history. Her message is unmistakable: Democrats have nothing to apologize for, nothing to be ashamed of and nothing to regret.

"One of the members called me and said, 'I'm in a tough race. It's even. I don't know how it's going to turn out,' " she recalls. " 'But I know one thing: that I wouldn't do anything differently. I wouldn't change my vote on health-care reform no matter how they tried to describe it. It was important for me to vote to give the opportunity that that bill provides.' "

"These members know what they believe in," she notes, channeling her own feelings through those of her colleagues. "They will have plenty of options in life. I hope one of them is to consider coming back to Congress."

I spoke with Pelosi less than 24 hours before she announced she wanted to stay on as Democratic leader, and everything she said made clear that she's not ready to allow millions of dollars in Republican attack ads to drive her from public life. She wants another crack at winning electoral vindication for a record she believes stands well on the merits.

About how she was used this year as a political pinata, she is philosophical. Republicans always look for a liberal they can target, she said, and for decades, the choice was the late Edward M. Kennedy. What was done to her, she says, "was almost chicken feed" by comparison. "Now they didn't have him," she adds. "To some extent they did this with Mrs. Clinton for a while." And then Pelosi performs the political math. "Now you take a woman and a progressive and you put it together. . ."

She stops, and breaks out laughing. She won't say it herself, but points to her former colleague Martin Frost's observation that a woman from liberal San Francisco was the ideal Republican target. "I don't think they could have done this to a male speaker," Frost told USA Today.

But Pelosi's rule on the gender issue is: "Don't underestimate, don't overestimate, just move on from it." So identity politics is absent when she's asked point blank why the Republicans attacked her so fiercely.

"Because I'm effective," she answers matter-of-factly. "It's why they had to do it. They had to put a stop to me because we were effective in passing health-care reform, which the health insurance industry wanted to stop; Wall Street reform, which Wall Street wanted to stop; [reforms of] students loans for taking the money out of the banks and giving it back to the taxpayer and to families."

And in what might be read as a reminder of why she should remain as leader, she adds: "I'm one of the most effective fundraisers that the Congress has had . . . because I believe in something."

Her analysis of why the party lost the House is compact. "Nine and a half percent unemployment damaged the majority," she says. "What made a difference in the election is the fact that they said we are spending money, and where are the jobs?" While she believes that what Democrats did on health care, education and Wall Street reform was ultimately about fixing the economy, the party has to think "shorter term" in putting "jobs, jobs, jobs front and center." That's her battle plan.

Nowhere is it written that a speaker has to step down from a leadership position after losing the majority. Between 1945 and 1955, Democrat Sam Rayburn and Republican Joe Martin swapped the speakership four times.

Yes, there are valid political reasons for House Democrats to change leaders, especially in light of Pelosi's poll numbers. But there's an argument rooted in justice that the person who built their majority should have a shot at winning it back. And aren't Democrats tired of reflexively capitulating to the other side's narrative? That is what Pelosi is counting on.