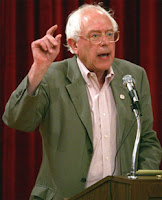 Published on Saturday, November 20, 2010 by CommonDreams.org

The billionaires are on the warpath. They want more, more, more.

The very rich want more, more and more and they are prepared to dismantle the existing political and social order to get it. During the last campaign, as a result of the (Republican) Supreme Court's Citizens United decision, billionaires were able to pour hundreds of millions of dollars of secret money into the campaign -- helping to elect dozens of members of Congress. Now, having made their investment, they want their congressional employees to produce.

Republicans in Congress, needless to say, are all on board. The key question is whether a Democratic president and a Democratic Senate go along to get along, or whether they draw a clear line at protecting the interests of the middle class and vulnerable populations of our country while tackling our economic and budgetary problems in earnest.

In the next month, despite all their loud rhetoric about the "deficit crisis," the Republicans want to add $700 billion to the national debt over the next 10 years by extending Bush's tax breaks for the top 2 percent. Families who earn $1 million a year or more would receive, on average, a tax break of $100,000 a year. The Republicans also want to eliminate or significantly reduce the estate tax, which has existed since 1916. Its elimination would add, over 10 years, about $1 trillion to our national debt and all of the benefits would go to the top 0.3 percent. Over 99.7 percent of American families would not gain a nickel. The Walton family of WalMart would receive an estimated tax break of more than $30 billion by repealing the estate tax.

The billionaires and their supporters in Congress are hell-bent on taking us back to the 1920s, and eliminating all traces of social legislation designed to protect working families, the elderly, children and the disabled. No "social contract" for them. They want it all.

They want to privatize or dismantle Social Security, Medicare and Medicaid and let the elderly, the sick and the poor fend for themselves.

They want to expand our disastrous trade policies so that corporations can continue throwing American workers out on the street as they outsource jobs to China and other low-wage countries. Some also want to eliminate the minimum wage so that American workers can have the "freedom" to work for $3.00 an hour.

They want to eliminate or cut severely the U.S. Department of Education, making it harder for working class kids to get a decent education, childcare or the help they need to go to college.
They want to rescind the very modest financial reform bill passed last year so that the crooks on Wall Street can continue to engage in all of the reckless behavior that has been so devastating to our economy.

They want to curtail the powers of the Environmental Protection Agency and the Department of Energy so that Exxon-Mobil can remain the most profitable corporation in world history, while oil and coal companies continue to pollute our air and water.

They want to make sure that billionaire hedge fund managers pay a lower federal tax rate than middle-class teachers, nurses, firefighters, and police officers by maintaining a loophole in the tax code known as "carried interest".

We know what the billionaires and their Republicans supporters want. They've been upfront about that. But what about the Democrats? Will President Obama continue to reach out and "compromise" with people who have made it abundantly clear that the only agreement they want is unconditional surrender? Or, will he utilize the powerful skills that we saw during his 2008 campaign for the White House and bring working families, young people, the elderly and the poor together to fight against these savage attacks on their well-being? Will the Democrats in the Senate continue to pass tepid legislation, or will they use their majority status to protect the interests of ordinary Americans and, for a change, put the Republicans on the defensive?

Bernie Sanders was elected to the U.S. Senate in 2006 after serving 16 years in the House of Representatives. He is the longest serving independent member of Congress in American history.
Posted by Paul B at 8:06:00 PM