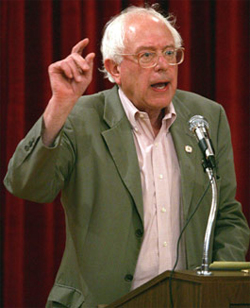 WASHINGTON - November 5 - “It is outrageous that General Electric/MSNBC would suspend Keith Olbermann for exercising his constitutional rights to contribute to a candidate of his choice. This is a real threat to political discourse in America and will have a chilling impact on every commentator for MSNBC.

“We live in a time when 90 percent of talk radio is dominated by right-wing extremists, when the Republican Party has its own cable network (Fox) and when progressive voices are few and far between.

“At a time when the ownership of Fox news contributed millions of dollars to the Republican Party, when a number of Fox commentators are using the network as a launching pad for their presidential campaigns and are raising money right off the air, it is absolutely unacceptable that MSNBC suspended one of the most popular progressive commentators in the country.

“Is Rachel Maddow or Ed Schultz next? Is this simply a ‘personality conflict’ within MSNBC or is one of America’s major corporations cracking down on a viewpoint they may not like? Whatever the answer may be, Keith Olbermann should be reinstated immediately and allowed to present his point of view."
Posted by Paul B at 3:52:00 PM