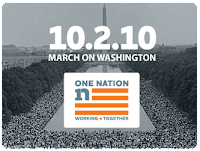 Whither One Nation?
By Mark Solomon
Published by Portside

The October 2, 2010 "One Nation Working Together" rally
at the Lincoln Memorial was a successful expression of the working class and multiracial foundation of the progressive majority. The large turnout of labor unions, African Americans and other communities of color provided a solid start for building a broadly based national coalition to urgently address the crisis of unemployment and inseparably related crises in education, health care, housing, militarism and the environment. While the imperative issue of peace and the ending of Washington's wars was not insistently stressed (except for Harry Belafonte's inspired speech and the strong words of Bob King of the UAW), the peace movement was a large, highly visible and indispensable presence whose major role in the coalition cannot be
questioned.


Since October 2, there has been little or no visibility of "One Nation Working Together." Such a lack of evident activity is fairly typical of coalitions that often fall prey to inertia after initial bursts of engagement. That is largely due to the pull upon participating organizations to address their own agendas and constituencies while organizational and
financial commitments to the larger coalition fester.

However, while such inertia is not atypical, it is not an option: not when the depth and urgency of multiple crises compel the existence and activism of the broadest and most inclusive coalition of nearly fifty major national organizations. Inertia is not an option
in the face of right-wing control of the House of Representatives. It is not an option in the face of an impending right wing assault on Social Security and Medicare aimed at destroying all vestiges of the historic social safety net. It is not an option when there is no end in sight to the hopeless Afghanistan war. It is not an option in light of finance capital's remorseless and disgraceful class war against the vast majority while it continues the reckless practices that plunged the country into deep recession in the first place. It is not an option in the face of brutal roundups of undocumented immigrants that threaten the constitutional rights of all. The compelling need for an inclusive and powerful coalition to stem the accelerating environmental crisis, to launch urgent and related "green jobs," to shift resources from military spending and unconscionable tax breaks for the rich to the rescue of bankrupted states and municipalities - is a task that is shunned at the price of unprecedented painful social dislocation.

As if those threats and challenges were not enough to reactivate "One Nation," the horrific killing and maiming in Tucson punctuate the need for a strong
organized progressive majority to challenge the right ing's growing impact on the nation's political culture. Pleas for media and politicians to tone down inflammatory rhetoric will be short lived while pleas to the gun lobby to scale back its corrosive influence will fall on deaf ears. The greatest promise for countering the present climate of violence and coercion clearly resides not in dependence on those controlling the media and politics, but in the unified strength of a progressive social movement able to positively
influence and change the political culture.

There is a consensus among progressives that a national social movement is needed; that the movement must be independent of the two parties; that its posture towards the present Administration must be to galvanize grass roots pressure upon it to consistently address
the needs of the nation's majority; that the movement must address all aspects of the many-sided crisis - the economy, the wars, the environment. In acknowledging
the inseparability of issues, it must build cooperation and mutual support among various single issue-oriented groups; it should have a strong, highly visible national center to give sharp focus to the issues while encouraging affiliate grass roots coalitions; its
decisions should be transparent and based upon democratic input from the local and national participating organizations.

Some on the left have criticized the October 2 One Nation rally for being tepid, for being too deferential to the Obama administration, for not encouraging a more active presence (such as a march and rally). Some of those criticisms are justified. But that criticism has
to be balanced against the potential of a movement that embraces the broadest and most influential organizations of left and center. In addition, the active participation of national, local and regional groups, including peace activists, can have a constructive and democratizing effect on the functioning of the coalition.

There has been considerable discussion lately on strategies for building a national progressive alliance. But that discussion has tended to ignore "One Nation Working Together," a framework that already exists and already embraces major organizations such as the NAACP, the AFL-CIO, the National Council of La Raza, US Students Association, Green for All, The Leadership Council on Civil and Human Rights and dozens of other organizations.

The task of regenerating One Nation has to come from the grass roots. At this crucial political moment, action by individuals and organizations is needed to press the leadership of One Nation to urgently convene a transparent national meeting. That gathering should reactivate the coalition, establish a national structure, recruit staff, develop programmatic ideas, set up media relations and assign personnel to work
with groups at the regional and local levels.

Groups and individuals should contact the principal organizers of One Nation (
www.onenationworkingtogether.org): Benjamin Jealous of the NAACP, George Gresham of SEIU Local 1199, Richard Trumka of the AFL-CIO, Randi Weingarten of the American Federation of Teachers and Bob King of the United Automobile Workers. Phone calls, letters, email, faxes, etc. should respectfully and supportively urge the
activation of One Nation to meet the urgent challenges of the moment (contact information can be conveniently found on Internet websites). That action can be
completed in minutes and can have an impact on activating, organizing and mobilizing the progressive majority. This is the moment to re energize One Nation Working Together.
________________

Mark Solomon is past national co-chair of the Committees of Correspondence for Democracy and Socialism (CCDS) and is currently Sheila Biddle Ford
Foundation Fellow at the W.E.B. Du Bois Institute for African and African American Research at Harvard University
Posted by Paul B at 2:36:00 PM

Email ThisBlogThis!Share to TwitterShare to FacebookShare to Pinterest
Labels: Mark Solomon, One Nation Working Together