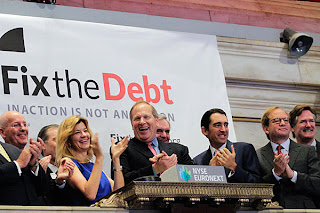 The New York Times should be embarrassed. On December 24 it gave a Christmas present to the corporate-backed lobby group Fix the Debt with its front-page Business section puff piece about the organization, which is pushing to balance the federal budget by slashing social programs while cutting taxes for the rich.
The 1149-word piece, ”One Woman’s War on Debt Gains Steam,” by reporter Annie Lowrey, is a fawning profile of the group’s public face, Maya MacGuineas. The article makes it appear that the Fix the Debt group was hatched last year at a dinner party at Senator Mark Warner’s house, when in fact it is simply the latest incarnation of Pete Peterson, the billionaire Wall Street financier who over many years has invested tens of millions of his money in his long-term crusade to reduce the federal debt on the backs of the poor and middle class, including the Committee for a Responsible Federal Budget, which Peterson funded and where MacGuineas once worked. Peterson is also the largest funder of Fix the Debt, but he isn’t mentioned in Lowrey’s article. The launching of Fix the Debt was announced on the Peter Peterson Foundation website. Lowrey could easily have found dozens of articles on the web about Fix the Debt that reveal Peterson’s crusade and his role in the group, including an investigative article in New Yorkmagazine. Los Angeles Times business columnist Michael Hiltzik exposed Peterson’s long-term crusade to forge an elite consensus to slash social spending in pieces last October 2 and October 9.Bob Kuttner performed a similar service in an article for American Prospect.
Indeed, Times columnist Paul Krugman mentioned Peterson’s close ties to the organization in his column “Maya and the Vigilantes” two days before Lowrey’s article appeared.

Peter Dreier is professor of politics and chair of the Urban & Environmental Policy Department at Occidental College. His new book, The 100 Greatest Americans of the 20th Century: A Social Justice Hall of Fame, was recently published by Nation Books.