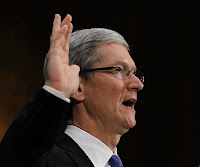 A Senate panel is examining how Apple sidestepped tens of billions of dollars in taxes around the world.
The panel is led by Senator Carl Levin, the Michigan Democrat who is chairman of the Senate’s Permanent Subcommittee on Investigations and a fierce critic of what he sees as corporate wrongdoing.  Carl Levin's opening statement:


Today the Subcommittee holds a second hearing to examine how U.S.-based multinational corporations use loopholes in the tax code to move profits to offshore tax havens and avoid paying U.S. taxes. In September, we examined two case studies: (1) a study of how Microsoft Corporation shifted profits on U.S. sales to U.S. customers from the United States to an offshore tax haven; and (2) a study of how Hewlett-Packard devised a “staggered foreign loan program” to effectively repatriate offshore profits to the United States without paying U.S. taxes that are supposed to follow repatriation.
Today the Subcommittee will focus on how Apple effectively shifts billions of dollars in profits offshore, profits that under one section of the tax code should nonetheless be subject to U.S. taxes, but through a complex process avoids those taxes.
Our purpose with these hearings is to shine a light on practices that have allowed U.S.-based multinational corporations to amass an estimated $1.9 trillion in profits in offshore tax havens, shielded from U.S. taxes. One study has estimated that offshore earnings stockpiled by S&P 500 companies using these techniques have increased 400 percent in the last decade.

The New York Times in their coverage on page B1 starts with the headline- Apple Defuses Tax Tensions.  I don't know. Are your tensions defused?
The big scandal in Washington is how the IRS asked extra questions of the Tea Party.  A more significant scandal is, How do U.S. corporations avoid $60 billion in taxes. What is the IRS doing about this tax avoidance?
See post below.