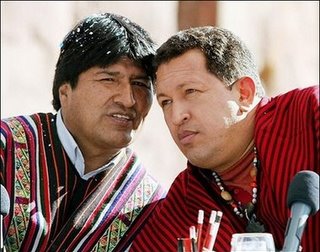 It's difficult to grasp the facts behind the murky fog of Venezuelan crisis. Based more or less on intuitions, but also credible documents, some blame most of the crisis on the CIA. Some national security types, abhorring populism, claim that the Venezuela state is consolidating dictatorial power precisely by winning so many elections! Others, while friendly to Venezuela, blame the Caracas government for failing to address the problems of violent crime and economic malaise.
President Barack Obama may or may not know what various US operatives are doing. We have seen evidence of a "state within the state" before, going back as far as the CIA's operations against Cuba. In Obama's time, the president correctly named the 2009 coup in Honduras a "coup", and then seemed powerless to prevent it. At his first Summit of the Americas, a friendly Obama shook the hand of Hugo Chavez before Obama's top adviser tried to sabotage the warming of relations.


Call me naive, but I do not believe President Obama wants to see President Maduro overthrown. Chaos would follow. The US would be blamed. Relations with Latin America would freeze below zero. The president probably thinks Maduro should thrash in his own domestic contradictions.
But there's another US "government", a secret network that works tirelessly to undermine any Latin American threat to the dominance of American capital and military power. They understand that the president must be provided with "plausible deniability", and so they keep Obama out of the loop. Sometimes they operate through the CIA, sometimes under Republican-Democratic "democracy promotion" programs, sometimes through third parties such as the Florida-based FTI Consulting. Democratic Party political consultants and pollsters have worked for Venezuela's opposition. It's difficult even for a president to keep a grip on it all. And that being the case, transparency disappears for the US Congress and public.
Obama's public statements this week certainly gave moral support to the street demonstrations. While also including a vague call for "dialogue", Obama is playing with fire. Obama immediately needs to rein in the entire entourage of US-supported agents of destabilization and issue them a clear cease-and-desist order, or he and the US government will be blamed for what may happen in the weeks ahead. He needs request and support whatever consensus emerges this week from the region's elected governments and the United Nations.
The American Congress and public are becoming used to street protests overthrowing elected governments regardless of the issue of national sovereignty. "Humanitarian intervention" in the affairs of other nations means willfully ignoring sovereignty where egregious human rights abuses are at stake and no negotiations are possible. The argument is somewhat attractive up to the point where it revives the Law of the Jungle. In the case of Venezuela, not only sovereignty but representative democracy are at stake, in a region which only recently began to shed the US-supported rule of oligarchs and generals.
The forgotten facts amidst the mounting frenzy is that President Maduro won the April 2013 Venezuelan election by slightly under two percent, and his alliance were victors by ten percent in last December's nationwide municipal elections.
The losers of those Venezuelan elections have turned into Leninists of the Right, seeking to create a counter-revolutionary situation in which the government apparatus crumbles and they seize power. The leaders want martyrs in the streets. In their apocalyptic view, a coup in Venezuela would spiral swiftly into the collapse of the oil-dependent Bolivian, Ecuadoran and Nicaraguan governments, and be a deathblow to Cuba.
If this frightening vision fails, the anti-Maduro forces will regroup and resume their strategy of destabilization on a permanent basis, a virtual civil war in the guise of a political conflict, in hopes that a segment of Maduro's present voting bloc - estimated at fifty to 56 percent - switches sides in a future election out of simple desire for "normalcy".
The peace and justice movement in the US, along with Congressional allies, have a potentially-important role in pressuring Obama, and secretaries Kerry and Hegel, to rein in the agents of America's dirty wars. A Congressional coalition led by the Miami Cuba Lobby is already agitating for Maduro's demise. Where are the Congressional progressives? Despite frequent denials by US officials, for example, the State Department's own Inspector General found that the Pentagon and US "democracy programs" supported individuals and groups "actively involved in the brief ouster of the Chavez government" in the 2002 coup attempt.
Article originally appeared on tomhayden.com (http://tomhayden.com/).

See website for complete article licensing information.
Posted by Duane Campbell at 10:32:00 AM