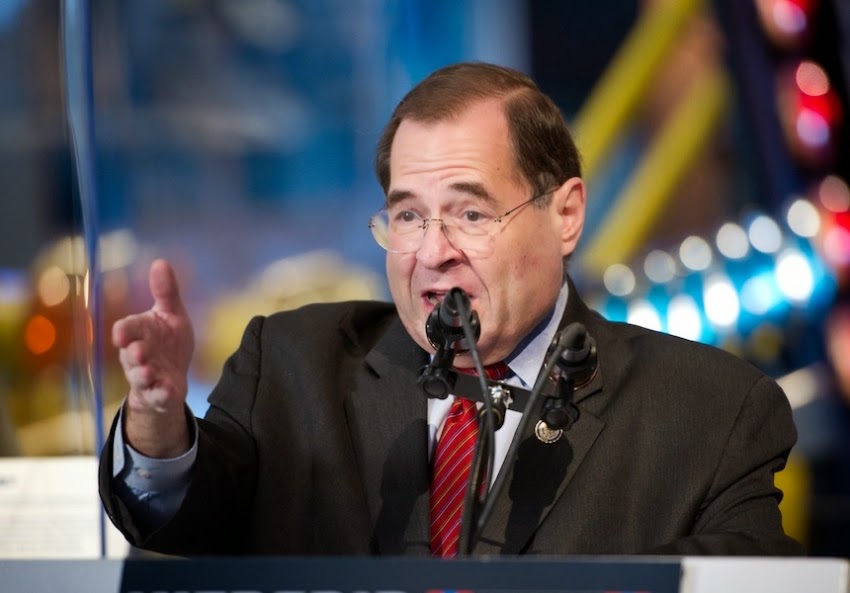 “We want to re-create an economy that works for the American worker, not just the richest 1 percent,” said Rep. Jerrold Nadler (D-N.Y.) at a Congressional Progressive Caucus (CPC) press conference inside the Capitol, flanked by CPC co-chairs Keith Ellison (D-Minn.) and Raúl Grijalva (D-Ariz.) in addition to fellow caucus members Jan Schakowsky (D-Ill.), Barbara Lee (D-Calif.) and Matt Cartwright (D-Pa.).
In today’s Congress, too often a grim landscape of neoliberalism in gridlock, the CPC’s Better Off Budget stands little chance of passing. But that’s not so much the point: The proposal is a broad statement of values, an effort to flush austerity out of the annual budget debates that are often dominated by the Right. By fashioning an alternative to Paul Ryan’s safety-net-slashing schemes, progressives hope to shift the conversation away from austerity and toward economic fairness.


It’s the fourth year the CPC has released its own budget, and the latest variant has much in common with previous proposals. Like last year’s Back to Work Budget, it features a hodgepodge of progressive economic demands: a tax hike on the super-wealthy, the creation of a financial transactions tax and carbon tax, an end to generous tax loopholes for the fossil fuel industry and cuts in military spending, including a full withdrawal from Afghanistan.
Last week, the New York Times dubbed President Obama’s latest budget proposal a “populist wish list.”But unlike that plan, the CPC’s budget actually repeals the so-called sequester—a series of across-the-board spending cuts that kicked in last March.
The CPC’s proposal also includes some timely additions to its usual progressive potpourri—a minimum wage hike to $10.10 and a repeal of the billions in food stamp cuts that Congress voted for in February.
Even though Social Security is funded separately from the federal budgeting process, the caucus also threw in reforms heralded by progressive organizers. The budget calls on “scrapping the cap”—lifting a tax exemption that prevents high-income earners from contributing more to Social Security. And instead of “chained CPI,” the Better Off Budget calls on adopting what’s called the consumer price index for the elderly, or CPI-E—a more generous cost-of-living adjustment that would increase monthly benefits.
Echoes of Edward Snowden’s revelations, too, found themselves in the proposal. The CPC budget asks that the President disclose to Congress his annual budgetary requests for each individual intelligence agency. Currently, the White House only issues a lump-sum spending request for the different spy agencies combined.
“This just extends that so that people have a greater idea of how that money is allocated,” said Jan Schakowsky, who sits on the House Intelligence Committee.
“Democracy flourishes when people know what’s going on,” said caucus co-chair Keith Ellison, when asked about that provision. “In the darkness, even the most well-intentioned don’t have any accountability. And often times you see abuses that grow. So we think it’s better for the democratic process.”
Dean Baker, co-director of the Center for Economic and Policy Research, appreciates that the proposal draws the connection between public spending and job creation.
“The basic outlines make very good sense,” Baker says. “We still are way below full-employment by any reasonable measure. The best way to boost the economy is with more spending—we could wait for the private sector until our face turns blue, it’s not gonna happen.”
But Baker remains skeptical of what he views as an unwarranted emphasis on trimming the deficit. The CPC’s plan, for instance, proudly advertises its ability to shrink both the deficit and public debt. In each case, these reductions actually go further than the Obama budget.
“It really permeates just about every national economic policy debate,” Baker says. “Even the most progressive people in Congress, they feel like they have to genuflect before this idea of getting deficits down, getting the debt down.”
The Better Off Budget comes early in this year’s budgetary process—in advance of any GOP counter-proposal to the president’s offer. This should give the Progressive Caucus ample time to whip votes in the House, says one staffer.
Vote totals matter because they offer insight into the traction that progressive policy proposals carry within the Democratic Caucus. And if the momentum of past years is any indication—since the first CPC budget in 2011 this exercise in progressive budgeting has gone from being shamelessly red baited to celebrated by mainstream liberals—this year’s plan is due for another uptick in support.
From In These Times
Posted by Duane Campbell at 8:57:00 AM