Earth Day and the Case for Eco Socialism

By Colin Kinniburgh
In her editorial in the last issue of Jacobin, Alyssa Battistoni makes an eloquent case for a more ecologically-minded left politics.  “It’s ridiculous that we still bracket climate change and water supplies as specifically environmental issues,” she writes: “the questions at hand are ones of political economy and collective action . . . things the Left has plenty to say about.” It’s an obvious point but one that remains under-acknowledged on the Left, especially among socialists; “Environmental leftism,” as Battistoni notes, “tends to have an anarchist bent.”
Still, an increasingly coherent left environmentalism is beginning to take form under the banner of “ecosocialism,” a school of thought that has advanced critiques not unlike Battistoni’s own for some three decades now. But Battistoni herself rejects the label in favor of the provocative “cyborg socialism.” The notion of ecosocialism, she complains, is “too earth-toned." 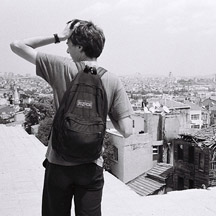 Colin Kinniburgh is an assistant editor at Dissentand a member of System Change Not Climate Change. On Earth Day, he will be joining a rally and march on Wall Street as part of the Global Climate Convergence.