Why we support Tom Torlakson for Superintendent of Public Education

Why I Support Tom Torlakson, 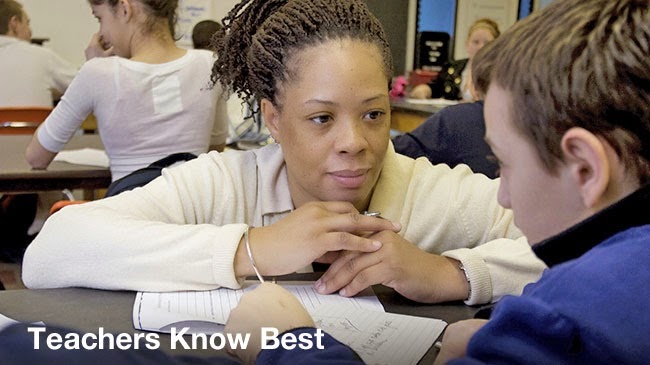 I, and the Sacramento Progressive Alliance supports the re-election of Tom Torlakson for  California Superintendent of Public Instruction.
If you believe in public education, if you think preparing students to live and work in a democracy is an important role for state government- then this election is important.  The election will set the direction of school improvement for the next four years.
You and I have a choice.  It is not a perfect choice, but the options are stark. We can continue with the current improvements in k-12 education (Torlakson), or we can move the state down the road of test driven, corporate neoliberal model of schooling (Tuck).  Wisconsin, Indiana, Pennsylvania, North Carolina, Kansas, Louisiana, Texas, are following this route- and their schools are failing.
Current scores on achievement tests for California students are too low.  This is primarily a result of California’s underinvestment in children, its lack of support for children in poverty, and California’s low investment in  k-12 schools for the last thirty years.
We can not improve the schools without improving funding for schools and support for children living in poverty.  That argument being made by Marshall Tuck is a fraud.


Tuck is probably  not a bad person.  However Wall Street and Silicone Valley billionaires are spending millions to elect Tuck because he supports a corporate takeover of public schools to make profits- extreme profits- for private corporations.  This is a selling out of the California Dream! Electing Tuck is a part of a nation wide effort to scapegoat teachers and to undermine their due process rights.  This campaign is an integral part of the neoliberal project to curtail and to restrict unions.
Marshall Tuck promotes the federal educational efforts to use more high-stakes , standardized testing and to use the results of these flawed tests to evaluate teachers and schools.  He has made a major campaign issue of supporting the Vergara decision that would limit the right of a teacher to a hearing before being dismissed and  would increase the  time for a probationary teacher to gain permanent status from two years up to as much as ten years.  Tuck has fervently promoted this false road to reform while not joining  with teachers and other groups to improve funding for k-12 education. In other words, to Tuck lack of money is not the problem- the problem is teachers.  There is no significant data supporting this viewpoint. It is a cornerstone of neoliberal ideology.
The Tuck campaign is an effort by  many anti - union  philanthropists and a group of  Democrats,  to gain control of this office .  They have  over 4.7 million dollars for this campaign.  Corporate advocates want Tuck in office to  support the anti tenure decisions and anti teacher due process  procedures of the Vergara  v. California case.

According to the Torlakson web site, major funders of Tuck  include:

"$500,000 from Carrie Walton Penner, whose family made its fortune running anti-union, low-wage paying Wal-Mart. The Walmart 1% website reports that Penner's biography includes serving on the board of the Alliance for School Choice - a school voucher advocacy group.

$300,000 from John D. Arnold, a former Enron trader and funder of efforts to persuade governments to cut public employee pensions.
$1 million from corporate CEO Eli Broad. He drew statewide attention when it was revealed he had donated $500,000 to a group with ties to the Koch Brothers to defeat Proposition 30 and pass Proposition 32.

Here's how Parents Across America, a public school advocacy group, described Broad's approach: "Broad and his foundation believe that public schools should be run like a business. One of the tenets of his philosophy is to produce system change by 'investing in disruptive force.' Continual reorganizations, firings of staff, and experimentation to create chaos or 'churn' is believed to be productive and beneficial, as it weakens the ability of communities to resist change."

For background on the financing of the corporate “reform” crowd see  http://choosingdemocracy.blogspot.com/2014/10/profits-for-corporate-school-reformers.html

If elected, Marshall Tuck would appoint a series of  “corporate reform” advocates to key policy positions in the California Dept. of Education, this is what Arne Duncan did in the U.S. Dept of Education to create Race to the Top, an extension of the effort on testing, and several other not helpful school policies.

Tom Torlakson, the incumbent, has long recognized the need for improving school funding.  As a legislator he authored the Quality Education Investment Act which brought three billion dollars to schools, and he was a leading campaigner for Proposition 30 in 2012 that has restored school funding. Currently he  supports extension of Prop. 30 taxes which has  begun to  restore  funding to California schools after the devastation of the national  economic crisis when over 30,000 teachers were dismissed in this  state.  Schools in other states without new taxes currently continue to reel from austerity budget cuts. See  for example Texas, Wisconsin, Michigan, North Carolina, Pennsylvania, Louisiana and more.  Tuck avoids responding to questions as to whether  he supports extending the current  funding sources.
Tom Torlakson continues to work to fund the schools.  Tuck is selling the snake oil message that we don’t need new funds, just “new thinking”.  This corporate campaign of misinformation is a reason that Michelle Rhee and the Sacramento Bee among others support Tuck.  Rhee can not vote in this race as it was recently revealed that her legal residence is in Tennessee, not in Sacramento.   It is unknown  where she pays taxes, if at all.

Some readers may know that I spent the prior 35 years working to improve school opportunities for low income and minority students ( now they are the majority of students).  See my book, Choosing Democracy: a Practical Guide to Multicultural Education.    Torlakson has not done enough to improve our schools.  However, his opponent, Marshall Tuck is much worse.

Education Week has noted that  influential advocacy groups that generally oppose an agenda to support public schools and classroom teachers – including Democrats for Education Reform, Stand for Children, and StudentsFirst – are throwing large amounts of money into  specific races.  Right wing organizations backed by the Koch brothers and Karl Rove, along with the corporate sponsors listed above,  are significantly out-spending teachers unions in these  races – including in California. These are the folks that wish to dismantle our public education system and to create a private, for profit,  education system for themselves.  These are the enemies of public schools and of democracy. Marshall Tuck is their candidate in California. He must be defeated.
As you consider your vote, please consider carefully the role of the corporate school reform crowd in financing and advancing one candidate.