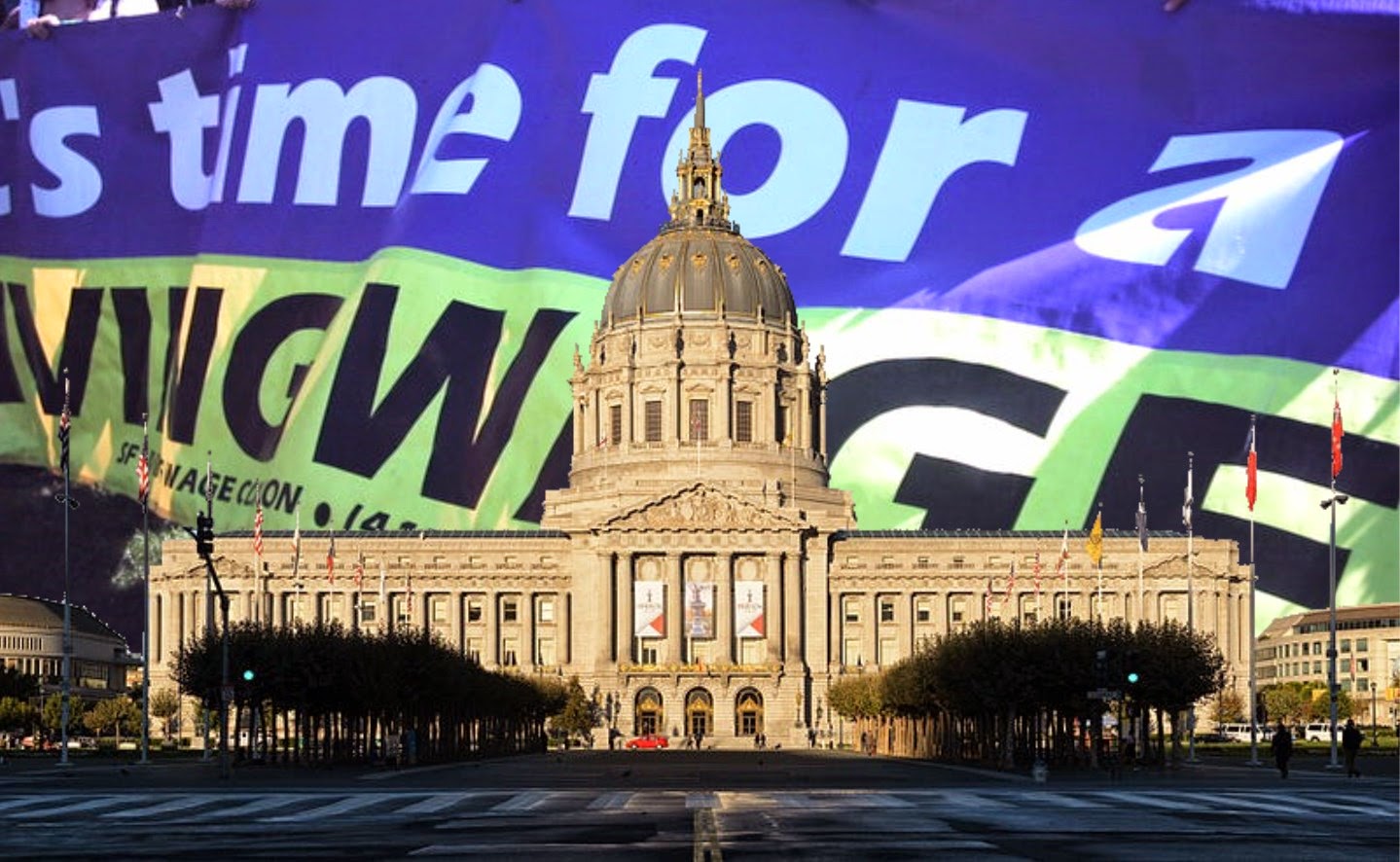 
In San Francisco, Prop. J includes an index for the minimum wage to keep pace with cost-of-living increases, or the rise in consumer prices, as Social Security does. That provision could help to lessen the severe affordability crisis of rental housing in the Bay Area, where economic security for low-wage workers remains elusive, according to Mar.
Across the bay in Oakland, 81 percent of the voters approved Measure FF to raise the hourly minimum wage of up to 48,000 workers to $12.25 an hour from California’s current minimum of $9 per hour by March 2, 2015. Like San Francisco’ Prop. J, Measure FF is indexed to the annual rate of inflation.
“This is a huge win for all low-wage workers and our entire community,” said Kate O’Hara, executive director of the East Bay Alliance for a Sustainable Economy, part of the Lift Up Oakland coalition. “When workers earn more they spend more, and that is good for economy, too.”
Measure FF also mandates that employers provide their minimum-wage employees with up to nine days of paid sick leave coverage per year, which San Francisco law already provides.
“Receiving pay when ill and unable to work helps immensely,” Burger King security officer John Jones, 40, said in a phone interview. “I missed five days of work due to a sickness earlier this year, lost all that pay, and am still recovering.”
With this new pay raise of $2.25 scheduled to take effect next March, Jones’ living standards will improve, he said. Now his family will be able to wash laundry once a week versus every two weeks, pay down debt and eat better quality food.
“From my perspective this is just a good first step in Oakland,” said Dan Siegel, a civil rights attorney and Oakland mayoral candidate who finished in fifth place with 12 percent of the vote. “Growing income inequality is the most critical issue facing U.S. society, and efforts to raise the minimum wage in San Francisco, Oakland and other cities show that people in the U.S. are ready to address the issue.”
Consider this: “The real minimum wage (adjusted for inflation) is lower today than it was in 1956 during Eisenhower’s first administration,” writes John Bellamy Foster in the Monthly Review. Real wages measure what workers can buy with their pay.
In Alaska, Arkansas, Nebraska and South Dakota, citizens voted on ballot initiatives to approve increasing the minimum wage incrementally. In Illinois, voters approved an advisory measure to hike the state minimum wage.
Alaska’s minimum wage would climb from $7.75 per hour to $8.75 on January 1, 2015. In Arkansas, the state’s minimum wage of $6.25 per hour rises to $7.50 per hour on January 1, 2015. Nebraska voters approved increasing the state minimum wage from $7.25 per hour to $8 on January 1, 2015. In South Dakota, voters approved upping the state minimum wage of $7.25 per hour to $8.50 on January 1, 2015.
After a deep recession and a weak recovery, American workers need a raise. Tuesday’s passage of minimum wage increases across the U.S. is proof that voters are ready and willing to make that happen.

Reprinted from Capitol and Main

Seth Sandronsky is a Sacramento journalist and member of the freelancers unit of the Pacific Media Workers Guild, which is a local office of the Newspaper Guild, a part of the Communications Workers of America.
Posted by Duane Campbell at 2:36:00 PM