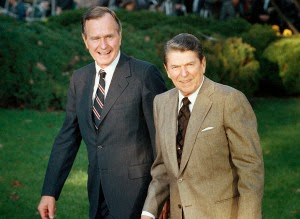 WASHINGTON (AP) — President Barack Obama's anticipated order that would shield millions of immigrants now living illegally in the U.S. from deportation is not without precedent.

Two of the last three Republican presidents — Ronald Reagan and George H.W. Bush — did the same thing in extending amnesty to family members who were not covered by the last major overhaul of immigration law in 1986.
There was no political explosion then comparable to the one Republicans are threatening now.

A tea party-influenced GOP is poised to erupt if and when Obama follows through on his promise. He wants to extend protection from deportation to millions of immigrant parents and spouses of U.S. citizens and permanent residents, and expand his 2-year-old program that shields immigrants brought illegally to this country as children.

"The audacity of this president to think he can completely destroy the rule of law with the stroke of a pen is unfathomable to me," said GOP Rep. Steve King of Iowa, an outspoken opponent of relaxing U.S. immigration law. "It is unconstitutional, it is cynical, and it violates the will of the American people."

Such strong feelings are common among congressional Republicans. GOP leaders warn that an executive order from Obama would "poison the well" and severely damage Republicans' willingness to work with the president during his final two years in office.

Some Republicans have even raised the possibility of impeachment.

Nearly three decades ago, there was barely a peep when Reagan and Bush used their authority to extend amnesty to the spouses and minor children of immigrants covered by the 1986 law.

In 1986, Congress and Reagan enacted a sweeping overhaul that gave legal status to up to 3 million immigrants without authorization to be in the country, if they had come to the U.S. before 1982. Spouses and children who could not meet that test did not qualify, which incited protests that the new law was breaking up families.

Early efforts in Congress to amend the law to cover family members failed. In 1987, Reagan's Immigration and Naturalization Service commissioner announced that minor children of parents granted amnesty by the law would get protection from deportation.

Spouses and children of couples in which one parent qualified for amnesty but the other did not remained subject to deportation, leading to efforts to amend the 1986 law.

In a parallel to today, the Senate acted in 1989 to broaden legal status to families but the House never took up the bill. Through the INS, Bush advanced a new "family fairness" policy that put in place the Senate measure. Congress passed the policy into law by the end of the year as part of broader immigration legislation.

"It's a striking parallel," said Mark Noferi of the pro-immigration American Immigration Council. "Bush Sr. went big at the time. He protected about 40 percent of the unauthorized population. Back then that was up to 1.5 million. Today that would be about 5 million."

But a lawyer who worked on the 1986 law and the 1990 follow-up as an aide to then-Sen. Alan Simpson, R-Wyo., said Bush's action wasn't controversial because it came after lawmakers had made it clear they were going to tackle the issue.

That's not the case now.

"Bush Sr. took the action that he did but it wasn't as if Congress was legislating anything to the contrary," said Carl Hampe of Fragomen, Del Rey, Bernsen & Loewy. "What's different now is that there is no clear path to legislative relief for the class of beneficiaries for which the president's order would provide relief."

Obama's announcement could come as early as this coming week and cover as many as 5 million people. Like Bush, Obama is expected to extend deportation protections to families of U.S. citizens or permanent residents.

"It's clear that it's fully within his legal authority to issue these orders," said Rep. Joaquin Castro, D-Texas. He said Republicans 'didn't raise any objections in the past when Republican presidents issued similar orders. This is pure political theater."

Obama's anticipated action would not award legal status, but it would offer temporary protection from deportation and the possibility of obtaining a work permit.

House Speaker John Boehner, R-Ohio, is stopping short of threatening to use Congress' power of the purse to thwart any executive action by Obama. Boehner's priority is to avoid a government shutdown. But he made it clear that Republicans will make Obama pay a price if he carries out his threat.

"Every administration needs this and needs that, needs all kinds of things," Boehner said Thursday. "You know, if he wants to go off on his own, there are things that he's just not going to get."
Like this on Facebook. Share the news.