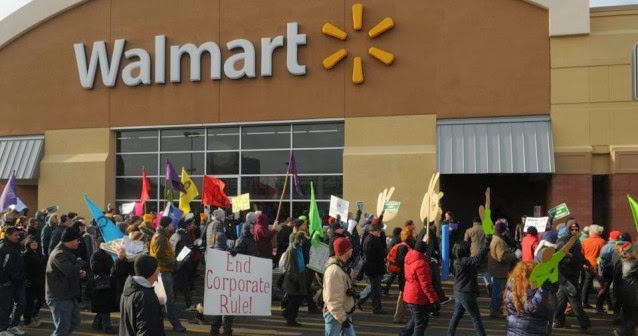 Walmart employees who are organizing as part of OUR Walmart are promising the biggest strikes ever on Black Friday, saying more employees will participate than the previous two years.
Barbara Gertz, an employee from Denver, Colorado, said organizers are expecting to see protests in 1,600 stores. While they don’t yet have a headcount of how many workers will strike or in how many cities, she said they’ve gotten calls “every day” from employees who want to join in. Protests will hit Los Angeles and a number of other major metropolitan areas. Employees at more than 2,100 Walmart stores across the country have signed an online petition asking for higher wages and better working conditions.


Gertz explained why she’s planning to take part. “There have been many times my family can’t even afford the gas to get me back and forth to work, so my husband had to wait in the car to take me home after work,” she said on a call with the press. “Every time one of us speaks out for change, we take the risk that Walmart will fire us. That’s not right and that’s not legal. That’s why we’re going on strike.” The National Labor Relations Board has backed up some of the claims of retaliation against organizing workers.
She noted that while the company has made some changes — it has announced an increase in the wage for its lowest-paid employees above the federal floor of $7.25 an hour, overhauled its scheduling program, and made some changes for pregnant employees — “associates are still struggling and our stores are still understaffed.” Striking Walmart workers have been calling for $15 an hour, more full-time work, and an end to retaliation to those trying to form a union over the past two years, and those demands were repeated on Thursday as they staged the first-ever sit-in strike.
Workers have gone on strike and protested for the past two Black Fridays. This time, they will also be joined by “tens of thousands” of community members, according to Stephanie Ly, AFT New Mexico president and a teacher, the “largest mobilizing of working families we’ve seen in recent history.” Teachers, elected officials, members of the clergy, and others will participate in protests at stores, flash mobs, marches, and prayer vigils.
“As a teacher, this tears me apart,” Ly said. “The constant struggle Walmart has created for families is not acceptable. It’s also holding back the next generation from the opportunities and fair shake they deserve.” They’ll join in the call for $15 an hour and full time work on behalf of “students who are coming to school hungry.”
While Walmart some workers will go on strike, others will be asked to report to work the day beforehand: Thanksgiving. Nearly 1 million workers will be asked to report to work on the national holiday to keep the store open all day, with Black Friday shopping deals starting at 6 p.m.
The company has admitted that less than half of its workforce makes more than $25,000. But it could easily raise pay by ending stock buybacks or raising the cost of an item like a DVD by a penny.
Bryce Covert is the Economic Policy Editor for ThinkProgress. She was previously editor of the Roosevelt Institute’s Next New Deal blog and a senior communications officer. She is also a contributor for The Nation and was previously a contributor for ForbesWoman. Her writing has appeared on The New York Times, The New York Daily News, The Nation, The Atlantic, The American Prospect, and others. She is also a board member of WAM!NYC, the New York Chapter of Women, Action & the Media. Follow Bryce Covert.
- See more at: http://portside.org/2014-11-15/walmart-workers-promise-biggest-black-friday-strike-ever#sthash.AUoBTDqy.dpuf
Posted by Duane Campbell at 12:56:00 PM