What ever happened to solidarity ? 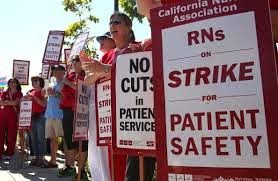 On November 11, 2014, the California Nurses Association ( AFL-CIO) goes on strike while SEIU ( CTW) sends its members into work across the picket lines. The ILWU prepares for a possible West Coast strike that could close the ports. What will other unions do?
I recognize the arguments about strategic plans and contract obligations for an advance notice for a strike.
But, when unions members are encouraged to cross picket lines – what do you have? While critics write essays about the internal conflicts in national union offices and new directions, if union members are not organized and led to not cross picket lines then all the rest is B.S.
In campaigns we call for international solidarity with workers across the globe ( a worthy goal) but many union leaders do not encourage solidarity with the worker down the street.
When national union leaders act as if union solidarity is of little importance, not much more than office politics, then it is no wonder that unions can’t win a contract nor an election in Tennessee. These unions are not  demonstrating  that solidarity works and workers in non union plants and non union states learn from their example.
Posted by Duane Campbell at 7:59:00 AM