Greek victory - Democracy vs. the Bankers

The Greek People Reject Austerity: Now the Rest of the World Must Join Them 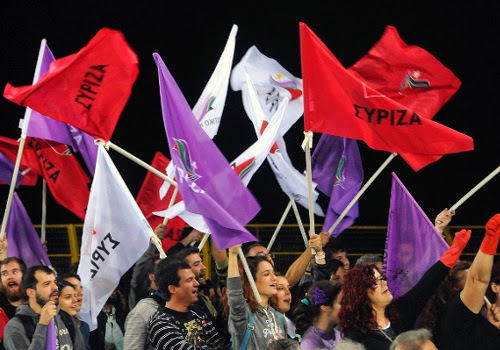 SYRIZA’s coming to power represents not just a rejection of the socially destructive austerity measures European elites imposed on the Greek people against their will.  It also represents a new hope for democratic and socialist electoral alternatives across Europe and the rest of the world.

Democratic socialists understand that winning an election does not mark the end of a process of social transformation. It is only the beginning, and a difficult road lies ahead for SYRIZA and its supporters. After years of deep depression, Greek society is in shambles. One quarter of the population is out of work; youth unemployment is over 50%; hundreds of thousands of households are without basic necessities like electricity; untold numbers have been forced to scavenge for their daily bread. Even after its clear victory at the polls, SYRIZA continues to face not just domestic political opposition but international isolation as well. It will quickly find out whether the so-called “troika” (i.e., the European Commission, the European Central Bank, and the International Monetary Fund) will give the Greek people room to breathe or try to punish them for their democratic audacity.
DSA also recognizes that this is a time for true international solidarity. The democratic will of the Greek people will only be realized if grassroots social movements across Europe force their governments to abandon their support for European Union (EU)-enforced austerity policies. This is particularly true in regards to ending the pro-austerity policies of the moderate left governments in Italy and France, and, most importantly, the Christian Democratic-Social Democratic coalition government in Germany.
But today, we should celebrate the fact that the Greek people rejected not just austerity, but the false alternative of the nationalist and fascist right. Tomorrow, we return to our hard work bringing similar triumphs to the United States and beyond.

Official DSA Statement, January 26, 2015.
Please help us build the socialist movement right here in the United States by making a contribution to the scholarship fund for our youth and student educational conference. The conference is in three short weeks and this year over 40 students applied for more than $10,000 in financial support, and we are nowhere near meeting that need.
If you can chip in even a little, it will help us bring young democratic socialist activists together from across the country. Give what you can today!
Maria Svart, DSA National Director
Posted by Duane Campbell at 11:35:00 AM