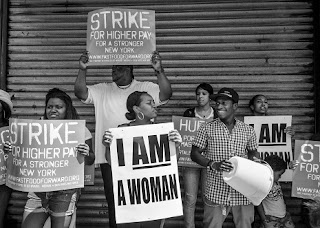 One of my favorite DSA T-shirts reads, “We organize with class.” It sums up what makes us different from other progressive activists. We understand that the capitalist class has an inherent interest in exploiting the working class and has structured society and all of our institutions accordingly. Yet, we also recognize that the ruling class shapes institutions and social relations not just to regulate and control people based on their position in the economy but also on their gender, race, age, sexual orientation, and other categories. In other words, based on other aspects of their identity.
For example, we women are taught from birth to be caretakers—of children, of men, of elderly relatives. In our capitalist system, we receive no economic support for carrying out these tasks. This has implications beyond the family, in that traditional women’s work, even when women are paid for it, is more devalued than that of men. Thus, child care, elder care, home health care, and food workers are some of the lowest compensated workers in our economy. It is to black feminists Kimberlé Crenshaw and those from the Combahee River Collective that we owe the insights of intersectionality, the idea that dominant groups use various aspects of our identities to exclude the subordinate groups from power and decision making and that these intersections of identity must be taken into account along with class when organizing for political power.


In other words, we don’t ask people to leave parts of themselves outside the door when we’re creating our political movement. We know that our unity is in fact stronger when we better understand the complexities of what we’re fighting, so we need everyone’s insights. We know that black women experience sexism differently than white women because of racism, and black women experience racism differently than black men because of sexism. Similarly, all men benefit from male privilege, but black men benefit less than white men because of racism. It’s a similar dynamic with class: working-class people have a common interest against capitalism, but precisely because racism and sexism exist alongside with and intersect with capitalism, we are vulnerable to the divide-and-conquer tactics of the economic ruling class.
Which brings us to the presidential election. Our first black president may be followed by our first female president, both of them good on some issues but horrible on others. Just as the far right whipped up a racist frenzy against Barack Obama, it will make misogynist attacks on Hillary Clinton. We must stand against these attacks for what they are, but also fight the idea that any one individual can inherently represent the interests of all who share some aspect of that person’s identity.
Some feminists celebrate Clinton simply for being a woman, rather than taking a holistic look at her policy choices related to women, and more important, her policy choices related to all women, whether poor women, migrant women, women workers, women of color, LGBT women, and so on. We don’t want individualistic, “Lean-in” versions of feminism. We want socialist feminism. We understand women’s shared interests as well as our differences and want to make sure no one is left behind just because one woman can break through the glass ceiling.
Cooperatively and democratically building the socialist movement to value the perspectives we each bring is the only way we can combat the seductive ideology of the ruling class: that individual merit can elevate anyone of any background to power, and that the current system is fundamentally fair and democratic.
That’s why I’m so excited about the Bernie Sanders campaign. Bernie knows that the deck is stacked against the majority of us, and in his campaign he does two things that are critical: he names the capitalist system for what it is, and he “speaks American,” meaning that he uses the U.S. idiom of fairness and inclusion to give voice to the powerlessness and anxiety so many of us feel. While we hope he develops a more proactively antiracist platform, we appreciate that Bernie points the finger at the worst culprit, Wall Street, rather than letting the ruling class scapegoat immigrants, people of color, or those it calls sexually deviant.
We know that Bernie’s presence will be the entry point for a new generation of political activists into progressive politics, and if we do our job right, many of those activists will stay as socialist activists long after the election, continuing to fight for collective solutions and transformation of society. We plan to organize our local chapters and members to build momentum and visibility for him and his politics. This will mean street and door-to-door outreach, organizing house parties and happy hours, putting together educational forums, attending political events at the local level, helping build grassroots coalitions to support him, and more, all done as proud DSAers. I hope I can count on your support as we build the DSA campaign. v

This article originally appeared in the summer 2015 issue of the Democratic Left magazine.
Posted by Duane Campbell at 4:35:00 PM