Germany Got Bailed Out- Why Not Greece ?

Sixty years ago today, an agreement was reached in London to cancel half of postwar Germany's debt. That cancellation, and the way it was done, was vital to the reconstruction of Europe from war. It stands in marked contrast to the suffering being inflicted on European people today in the name of debt.
Germany emerged from the second world war still owing debt that originated with the first world war: the reparations imposed on the country following the Versailles peace conference in 1919. Many, including John Maynard Keynes, argued that these unpayable debts and the economic policies they entailed led to the rise of the Nazis and the second world war. 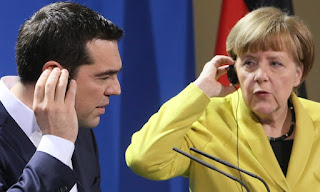 Greek debt crisis: Tsipras gets ultimatum to reach deal or face Grexit - as it happened

On Sunday, European leaders will meet for a summit that will decide whether Greece gets another bailout or leaves the eurozone


Read more
By 1953, Germany also had debts based on reconstruction loans made immediately after the end of the second world war. Germany's creditors included Greece and Spain, Pakistan and Egypt, as well as the US, UK and France.
German debts were well below the levels seen in Greece, Ireland, Portugal and Spain today, making up around a quarter of national income. But even at this level, there was serious concern that debt payments would use up precious foreign currency earnings and endanger reconstruction.


Needing a strong West Germany as a bulwark against communism, the country's creditors came together in London and showed that they understood how you help a country that you want to recover from devastation. It showed they also understood that debt can never be seen as the responsibility of the debtor alone. Countries such as Greece willingly took part in a deal to help create a stable and prosperous western Europe, despite the war crimes that German occupiers had inflicted just a few years before.
The debt cancellation for Germany was swift, taking place in advance of an actual crisis. Germany was given large cancellation of 50% of its debt. The deal covered all debts, including those owed by the private sector and even individuals. It also covered all creditors. No one was allowed to "hold out" and extract greater profits than anyone else. Any problems would be dealt with by negotiations between equals rather than through sanctions or the imposition of undemocratic policies.
Perhaps the most innovative feature of the London agreement was a clause that said West Germany should only pay for debts out of its trade surplus, and any repayments were limited to 3% of exports earnings every year. This meant those countries that were owed debt had to buy West German exports in order to be paid. It meant West Germany would only pay from genuine earnings, without recourse to new loans. And it meant Germany's creditors had an interest in the country growing and its economy thriving.
Following the London deal, West Germany experienced an "economic miracle", with the debt problem resolved and years of economic growth. The medicine doled out to heavily indebted countries over the last 30 years could not be more different. Instead, the practice since the early 1980s has been to bail out reckless lenders through giving new loans, while forcing governments to implement austerity and free-market liberalisation to become "more competitive".
As a result of this, from Latin America and Africa in the 80s and 90s to Greece, Ireland and Spain today, poverty has increased and inequality soared. In Africa in the 80s and 90s, the number of people living in extreme poverty increased by 125 million, while economies shrank. In Greece today, the economy has shrunk by more than 20%, while one in two young people are unemployed. In both cases, debt ballooned.
The priority of an indebted government today is to repay its debts, whatever the amount of the budget these repayments consume. In contrast to the 3% limit on German debt payments, today the IMF and World Bank regard debt payments of up to 15-25% of export revenues as being "sustainable" for impoverished countries. The Greek government's foreign debt payments are around 30% of exports.
When debts have been "restructured", they are only a portion of the total debts owed, with only willing creditors participating. In 2012, only Greece's private creditors had debt reduced. Creditors that held British or Swiss law debt were also able to "hold out" against the restructuring, and will doubtless pursue Greece for many years to come.
The "strategy" in Greece, Ireland, Portugal and Spain today is to put the burden of adjustment solely on the debtor country to make its economy more competitive through mass unemployment and wage cuts. But without creditors like Germany willing to buy more of their exports, this will not happen, bringing pain without end.
The German debt deal was a key element of recovering from the devastation of the second world war. In Europe today, debt is tearing up the social fabric. Outside Europe, heavily indebted countries are still treated to a package of austerity and "restructuring" measures. Pakistan, the Philippines, El Salvador and Jamaica are all spending between 10 and 20% of export revenues on government foreign debt payments, and this doesn't include debt payments by the private sector.
If we had no evidence of how to solve a debt crisis equitably, we could perhaps regard the policies of Europe's leaders as misguided. But we have the positive example of Germany 60 years ago, and the devastating example of the Latin American debt crisis 30 years ago. The actions of Europe's leaders are nothing short of criminal.
Nick Deirden, The Guardian
More comment