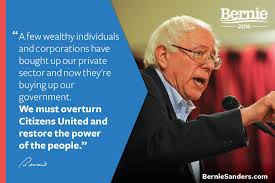 If the boorish, disjointed protest had not blocked him, the Westlake crowd would have heard Sanders talk knowledgeably about unemployment among African American youth, raising wages for the working poor, America’s high incarceration rate and the need for prison reform. He held forth later at the UW
“Too many young lives are being destroyed by the so-called ‘War on Drugs’,” the Democratic presidential candidate declared.  “Too many lives are being destroyed by our system of incarceration.” And, pledged Sanders, “No President will fight harder to end the stain of racism and reform our criminal justice system. Period.”


President Sanders?  The East Coast pundit class cannot grasp that a self-identified “democratic socialist,” from a tiny state, who has been preaching against corporate power in his Brooklyn accents for 50 years, could possibly mount a credible bid for the White House.  Tens of thousands of people, turning out at rallies across the country, beg to disagree.
“This is the largest crowd we’ve had so far,” said Sanders, addressing the overflow outside.  He drew almost as many people, inside and outside HecEdmundson Pavilion, as President Obama did five years ago in a rare Seattle public event.  The Sanders crowd record  is likely to stand for just 24 hours:  An even larger throng is likely when Sanders speaks in Portland on Sunday night.

Bernie Sanders speaks during a rally at Hec Ed Pavilion that drew an estimated 15,000 people to the University of Washington. (Joshua Trujillo, seattlepi.com)
Indeed, liberals nationwide and in Seattle have fallen in love before.  A crowd of 8,000 greeted another Vermont candidate, ex-Gov. Howard Dean, on a warm August day in 2003.  The “Deaniac” surged in the polls, and then collapsed after a third place showing in the Iowa caucuses.  Sen. John Kerry used the Washington caucuses to put a final nail in the coffin of Dean’s campaign.
The 2004 race for the Democratic nomination was summed up in a memorable slogan:  “Dated Dean, married Kerry.”
Sanders is, however, boosted by a tail wind of public discontent over economic inequality.  He argues, bluntly, that corporate America is “destroying America” by eroding the middle class with low wages, and that the no-limits, anything-goes financing of campaigns — thanks the the Supreme Court’s infamous 2010 Citizens United decision — has “totally corrupted. corrupted” a nation built on “government by the people.”
“The foundations of American democracy are being undermined,” Sanders cried last night.
The self-identified “democratic socialist” is running on a platform of extending to America social services taken for granted in Europe.
“We can join the rest of the industrialized world and have a health care system that takes care of all of our people,” Sanders told the overflow, assembled at the entrance to Husky Stadium.
The overflow gathering brought one symbolic moment of how Sanders has brought people together.  Former Washington State University student body president (and Butch the Cougar on sidelines) Zach Wurtz, clad in customary Cougar jacket and cap, posed beaming with the gates of Husky Stadium in the background.  Bernie Sanders was with the Dawgs.
Sanders had more in mind of what America could do.  Addressing “family values,” he said Americans who become parents should get 12 weeks’ paid vacation to bond with a newborn or newly adopted child.  He said the U.S. should have a mandatory minimum 10 days’ paid vacation a year.  Sanders argued for paid sick leave, and got a standing ovation with his call for pay equity.
Sanders is a rousing orator.  He was mighty rough on Republicans.  (A leading GOP candidate, Sen. Marco Rubio of Florida, is doing a pricey private fundraiser in Bellevue on Monday night.  Rubio said, in the Thursday candidate debate, that abortion should be illegal even in cases of rape and incest.)
“They (Republicans) believe that women in America should not have the right to control their own bodies,” Sanders cried.  “They believe that women in America should not have the right to buy the contraceptives they need.”
Again and again, however, Sanders returned to the theme of economic injustice.  “No person should work 40 hours a week for poverty wages,” he said, drawing his biggest ovation of the night.
In advocating the $15-an-hour minimum wage, Sanders did a shout-out to his host city.  “You did it in Seattle,” he said.  “We are now going to do it for the entire country.”
Dean went down.  But Sanders is picking up steam.  State Rep. Luis Moscoso, a warmup act, endorsed him.  State Sen. Pramila Jayapal mocked those who underestimate Sanders, saying, “What they don’t know is the power of the people is never defeated.”
Of course, that isn’t true. Clever political consultants, the well paid flunkies of the rich and powerful, have specialized in creating divisions that defeat populist candidates.
Yet, packed houses in Madison and Minneapolis, New Orleans and Phoenix, and now Seattle show that the singular message of Bernie Sanders is resonating.  And that message is directed to the nation’s billionaires, hedge fund managers and banks:
“You can’t have it all.  You cannot get huge tax breaks when millions of kids go to bed hungry . . . You cannot hide your profits in the Cayman Islands and Bermuda.  You will pay your fair share.”
Bernie Sanders has work to do in expanding his base in the Democratic coalition.  The crowds inside and outside Hec Edmundson Pavilion were almost entirely white.  African-American and Latino voters were the essentials in both of President Obama’s victories.
He still trails far behind Hillary Clinton in polls of Democratic voters, although closing the gap in Iowa and New Hampshire.  Still, given last night’s throng in Seattle — and expected crowds in Portland and Los Angeles — Clinton might be advised to come out of her four- and five-figure fundraising events and mix it with the folks. Sanders had an uplifting Saturday night doing exactly that.