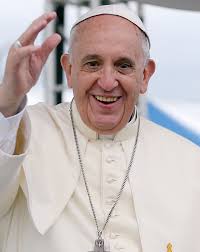 "If politics must truly be at the service of the human person, it follows that it cannot be a slave to the economy and finance. Politics is, instead, an expression of our compelling need to live as one, in order to build as one the greatest common good: that of a community which sacrifices particular interests in order to share, in justice and peace, its goods, its interests, its social life. I do not underestimate the difficulty that this involves, but I encourage you in this effort." - Pope Francis addressing Congress today
Brothers and Sisters: I am not a theologian, an expert on the Bible, or a Catholic. I am just a U.S. senator from the small state of Vermont.
But I am emailing you today to discuss Pope Francis in the hope that we can examine the very profound lessons that he is teaching people all over this world and some of the issues for which he is advocating.
Now, there are issues on which the pope and I disagree — like choice and marriage equality — but from the moment he was elected, Pope Francis immediately let it be known that he would be a different kind of pope, a different kind of religious leader. He forces us to address some of the major issues facing humanity: war, income and wealth inequality, poverty, unemployment, greed, the death penalty and other issues that too many prefer to ignore.
He is reaching out not just to the Catholic Church. He's reaching out to people all over the world with an incredibly strong message of social justice talking about the grotesque levels of wealth and income inequality.
Pope Francis is looking in the eyes of the wealthiest people around the world who make billions of dollars, and he is saying we cannot continue to ignore the needs of the poor, the needs of the sick, the dispossessed, the elderly people who are living alone, the young people who can't find jobs. He is saying that the accumulation of money, that the worship of money, is not what life should be about. We cannot turn our backs on our fellow human beings.


He is asking us to create a new society where the economy works for all, and not just the wealthy and the powerful. He is asking us to be the kind of people whose happiness and well-being comes from serving others and being part of a human community, not spending our lives accumulating more and more wealth and power while oppressing others. He is saying that as a planet and as a people we have got to do better.
That's why I was so pleased that in his address to Congress today, Pope Francis spoke of Dorothy Day, who was a tireless advocate for the impoverished and working people in America. I think it was extraordinary that he cited her as one of the most important people in recent American history.
As the founder of the Catholic Worker newspaper, Dorothy Day organized workers to stand up against the wealthy and powerful. Pope Francis said of her today in Congress:

In these times when social concerns are so important, I cannot fail to mention the Servant of God Dorothy Day, who founded the Catholic Worker Movement. Her social activism, her passion for justice and for the cause of the oppressed, were inspired by the Gospel, her faith, and the example of the saints.

How much progress has been made in this area in so many parts of the world! How much has been done in these first years of the third millennium to raise people out of extreme poverty! I know that you share my conviction that much more still needs to be done, and that in times of crisis and economic hardship a spirit of global solidarity must not be lost. At the same time I would encourage you to keep in mind all those people around us who are trapped in a cycle of poverty. They too need to be given hope. The fight against poverty and hunger must be fought constantly and on many fronts, especially in its causes. I know that many Americans today, as in the past, are working to deal with this problem.

The fact that the pope singled out Dorothy Day — a fierce advocate in the fight for economic justice — as one of the leaders he admires most is quite remarkable. We are living in a nation which worships the acquisition of money and great wealth, but turns its back on those in need. We are admiring people with billions of dollars, while we ignore people who sleep out on the streets. That must end.
Dorothy Day fought this fight, and as Pope Francis says, we must continue it. We need to move toward an economy which works for all, and not just the few.
We have so much poverty in a land of plenty. Together, we can work to make our country more fair for everybody.
I am glad that you are with me in this fight.
In solidarity,
Bernie Sanders
Posted by Duane Campbell at 5:11:00 PM