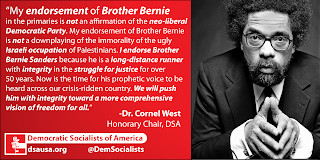 Members come from around U.S., support Sanders
Nov. 14,2015.
Share
By Chris Potter / Pittsburgh Post-Gazette
An Orthodox Christian church retreat in Westmoreland County might seem an unlikely place for the nation’s largest socialist organization to hold a national convention. But then the American political map is being redrawn in countless ways – not least by the organization’s favorite presidential candidate, Vermont Sen. Bernie Sanders.
“We’ve been pushing Bernie before he was running,” said David Duhalde, deputy director of the Democratic Socialists of America. “We knew he would give a large space for a conversation about democratic socialism.”
Organizers say 120 DSA members traveled from as far away as California to the Antiochian Village retreat in Bolivar. They’ll be there through Sunday, talking about a revolution that seems a bit more plausible than it did a year ago.
“This has already been such a mobilizing moment,” said Dustin Guastella, a Philadelphia DSA member who co-chairs the group’s We Need Bernie Committee.
Though Mr. Sanders refers to himself as a democratic socialist, he is not a DSA member. But the organization claims 6,500 Americans who are, and members say the movement has attracted new interest since Mr. Sanders decided to run as a Democrat this past spring.


What does Mr. Guastella tell people who ask what democratic socialism is all about? “I say we want to expand democracy outside politics and into the economic sphere” – in part by raising wages, nationalizing critical industries like health care, and ensuring free college education for all.
Mr. Sanders shares many of those values, but his campaign faces an uphill battle. Polls consistently show him trailing Democratic front-runner Hillary Clinton by sizable margins.
Trying to drum up enthusiasm in Pennsylvania, a state that picked Ms. Clinton over Barack Obama in the 2008 primary, “is a real challenge,” admitted Joseph Schwartz, a political-science professor at Temple University. “There's an east/west split in the state, and the Clintons also have strong ties to leaders in the black community.”
While there are DSA members scattered throughout the state, its only organized chapter is in Philadelphia.
Still, Mr. Sanders’ profile has given new visibility to a movement that, in recent years, has almost dared not speak its name. To proclaim oneself a socialist, said DSA member Natalie Midiri, “was like you were some sort of religious fanatic. It’s very different now.”
DSA members say they’re aware of the work ahead. During a Friday afternoon panel discussion about the Sanders campaign, members discussed the danger of “bern out” if Mr. Sanders loses, and of having their efforts entangled with the Sanders campaign itself. Any such coordination could run afoul of federal election laws.
The discussion also stressed the need to diversify DSA’s “overwhelmingly white” membership and to reach beyond the often insular confines of leftist politics. "What really matters is getting out there and talking to people and getting out of your comfort zone,” said Rahel Biru, who co-chairs DSA’s New York City chapter.
But for now, DSA members agree, the Sanders campaign is raising only the kind of red flags that socialists like. "Bernie is making it OK to talk about democratic socialism,” Elizabeth Henderson, co-chair of the We Need Bernie Committee said during the panel discussion. “And we haven't seen that in the last 40 years."