The governor failed to show up for an environmental award after outrage from environmentalists, indigenous leaders and labor activists who exposed Brown's abysmal environmental record. 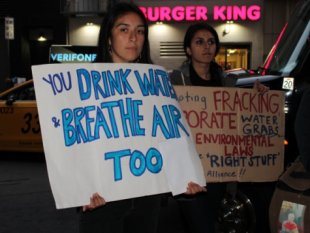 On October 17, Governor Brown failed to show up to receive a “Right Stuff” environmental award from the BlueGreen Alliance at a gala dinner at Le Parc Hotel in San Francisco as over 60 people protested outside.


Every year, the Apollo Alliance Project of the BlueGreen Alliance Foundationrecognizes business, community, environmental and labor leaders for their “outstanding work in advocating for family-sustaining jobs, clean energy, stronger infrastructure, and a better future for all of us.” This year, they selected Governor Jerry Brown as a winner in the government category.


Outraged over the selection of Brown for the award after he has advanced so many bad environmental policies such as promoting fracking, a coalition of environmentalists, indigenous leaders and labor activists organized the protest to expose the real, abysmal environmental record of Governor Brown.

At the protest, Michael Preston from the Winnemem Wintu Tribe, blasted Jerry Brown's Bay Delta Conservation Plan (BDCP) to build the peripheral tunnels and the federal Shasta Dam raise plan that will cause massive fish extinction and destroy the Delta.


“I am here as a Winnemem Wintu Tribe warrior to speak for the salmon and for our cultural beliefs and sacred sites,” said Preston. "We have to speak out against the peripheral tunnels and Shasta dam raises because they could make the fish extinct and destroy the whole Bay Delta Estuary. These plans will affect all of life more than we know.”


Brown's ten worst environmental policies were outlined in an alternative program that protesters handed out to attendees of the dinner. These policies include the following:


1. Twin Tunnel Plan: Brown is fast-tracking the $54.1 billion Bay Delta Conservation Plan (BDCP) that would divert massive quantities of water from the Sacramento-San Joaquin River Delta to corporate agribusiness, developers and oil companies. The construction of the peripheral tunnels will hasten the extinction of Sacramento River Chinook salmon, Central Valley steelhead, Delta and longfin smelt and green sturgeon, as well as imperil salmon and steelhead populations on the Trinity and Klamath rivers.


3. REDD: The REDD+ (Reducing Emissions from Deforestation and Forest Degradation+) allows Northern Hemisphere polluters to buy forest carbon offset credits from the global South. Brown is trying to link an agreement among Chiapas, Mexico; Acre, Brazil; and California, to AB32 (which commits to a 25% reduction of greenhouse gas emissions for 2020, and an 80% reduction for 2050).


4. Record Water Exports: The Brown administration authorized the export of record water amounts of water from the Delta in 2011 – 6,520,000 acre-feet, 217,000 acre feet more than the previous record of 6,303,000 acre feet set in 2005 under Schwarzenegger. Most of this went to corporate agribusiness, including mega-growers irrigating unsustainable, selenium-laced land on the west side of the San Joaquin Valley.


5. Record Delta Fish Kills:The Brown administration “salvaged” a record 9 million Sacramento splittail and 2 million salmon, steelhead, striped bass, largemouth bass, threadfin shad, white catfish and sturgeon in the Delta export pumping facilities in 2011. Since the actual number of fish killed in the pumps is at least 5 to 10 times those reported, the actual number of fish killed is probably 55 million to 110 million.


6. Central Valley Project Improvement Act: The act mandated the doubling of Central Valley anadromous fish populations, including Chinook salmon, steelhead, green sturgeon, white sturgeon, striped bass, and American shad, by 2002. Under Brown in recent years, rather than doubling, these fish populations have continued to decline. The Chinook salmon runs on the Sacramento River last year were only 20% of the level mandated by federal law and the endangered Sacramento River winter run Chinook population is threatened with extinction, due to massive water exports out of the Delta.


10. “Theme Park” Wetlands:The Department of Fish and Wildlife under the Jerry Brown administration is letting the Annenberg Foundation bulldoze a section of the Ballona Wetlands to build an interpretive center and help with the “restoration” of the land around the center.


Of course, any discussion of Brown's worst environmental policies must include his implementation of the privately-funded Marine Life Protection Act (MLPA) Initiative started by Governor Schwarzenegger in 2004.


The conflicts of interest, failure to comprehensively protect the ocean, shadowy private funding, incomplete and terminally flawed science and violation of the Yurok Tribe’s traditional harvesting rights have made the MLPA Initiative to create so-called “marine protected areas into one of the worst examples of corporate greenwashing in California history. These so-called “Yosemites of the Sea” fail to protect the ocean from oil spills and drilling, fracking, pollution, wind and wave energy projects, military testing and all human impacts on the ocean other than fishing and gathering.


For more information about the MLPA Initiative, go here.

I'd add an eleventh policy misstep: Brown vetoed even a study of a State bank. Public banking is part of America's most successful economic periods. Herbert Hoover invented the Reconstruction Finance Corporation, but it took FDR to use it to fund the Tennessee Valley Authority, and the first Bay Bridge. Not only did the RFC finance large, productive infrastructure projects at low rates, it paid interest to the public, not Wall Street. This becomes doubly important because nearly half the cost of such projects is financing.

So...instead of getting a line of credit from a State bank, the Brown administration's version of "fiscal responsibility" is to take from school children, the elderly and disabled to make a (completely unnecessary) "rainy day" fund. It's unnecessary because a line of credit would work as well, and more flexibly.

And public projects remain at the mercy of Wall Street's underwriting standards. Despite the presence of a California Infrastructure Bank, California still can't even finance its own infrastructure projects. Our favorite vampire squid--Goldman Sachs--financed the recent Bay Bridge rebuild, and the Kings' subsidy for their stadium in downtown Sacramento.

Worst of all, the underwriting restrictions of both existing public finance and certainly of Wall Streets lenders prohibit using money well for public purposes. The savings to Sacramento from housing the homeless, for one example, could more than pay for two Kings' Stadiums-worth of housing, but no lender is available for that project. That's a shame, and costs taxpayers an enormous sum ($40 million for the City alone) just for palliative care that does nothing to reduce homelessness.