SEIU: Do the Right Thing 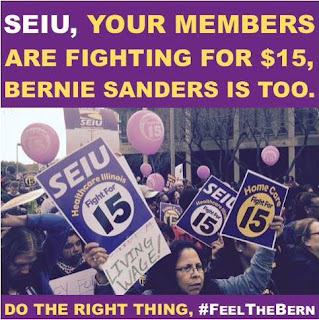 According to recent news accounts, the SEIU International Executive Board (IEB) is about to endorse Hillary Clinton on Tuesday, Nov. 17.

SEIU's biggest national campaign is the Fight for $15 and a union. Across the country, we are organizing workers to strike and demand a $15 minimum wage. Leaders and organizers will lose credibility if SEIU endorses a candidate in the Democratic Primaries who does not support a $15 minimum wage.

Members need to tell SEIU President Mary Kay Henry that an endorsement for Clinton at this time will divide and weaken our union. Call SEIU at 202-730-7000 and ask for Mary Kay Henry's office or email her at henrym@seiu.org.  SEIU also has a "concerns and complaints" line for members at 202-730-7684. Make your voice heard now!

Hillary Clinton is on public record as opposing a federal minimum wage of $15 per hour. She supports $12 an hour by 2020.  While she will support a higher minimum wage in certain markets and for certain sectors, she is not supporting the principle demand of SEIU's most important campaign as a national policy position.  It is hard to ask workers to strike for $15 an hour in one breath when we are opposing the candidate (Sen. Sanders) who proposed national legislation for $15 an hour, in order to support a candidate who rejects our demand.


In order for this effort to stop an early endorsement to succeed, we need you to forward this message to your co-workers and other SEIU friends.  Also be sure to leave comments on SEIU's Facebook page.

Some key points to make when you talk with SEIU leaders:
Membership support for Bernie Sanders is very strong because he has consistently been pro-union and pro-worker for 35 years of public life. Click here to read more about Sanders' pro-working families record.
Sanders won’t change his position regardless of the outcome of the election.  He walks picket lines, supports organizing, and has introduced bills to eliminate open shop provisions.  He understands that there cannot be a progressive agenda without a strong workers' movement.  (On the hand, Hillary Clinton was on the Walmart Board and never took a public position in that role to hold Walmart accountable for their anti-union, anti-worker practices. In fact, the Clintons never actively worked to get rid of right-to-work laws in Arkansas when they had the chance – Bill Clinton even supported right to work as governor.)

On all of the other issues that are most important to our members such as immigration reform, voting rights, marriage equality, and war and peace, Sanders is advocating positions consistent with SEIU and ones that are moving the Democratic Party in the right direction.

SEIU needs to show principled leadership for our members and the labor movement. We need to work with the Sanders campaign as it creates a pro-worker, anti-1% flank in the national political debate. The Sanders campaign is creating the best opportunity to align our organizing with our electoral work and to run candidates at all levels in the future to challenge politics as usual.

Call SEIU President Mary Kay Henry at 202-730-7000 and tell her that an early endorsement for Clinton will divide, not unite, our union. Tell President Henry we need to build unity and stay focused on the Fight for $15, Black Lives Matter, and immigration reform. Make your voice heard now!

Let the process run its course – we understand that Hillary Clinton is far better than any Republican candidate and if she is the nominee, we will all pull together to support her election.

Remember, to be successful, we need you to forward this message to your co-workers and SEIU friends.  Also "like" and "share" our SEIU for Bernie Facebook Page here.

In Solidarity,
Labor for Bernie