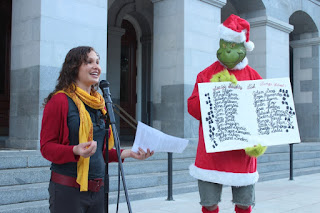 On December 10, 350 Sacramento and Rootskeeper.org co-sponsored a Day of Action in Sacramento with the theme "How the Grinches Stole Climate Justice."

The event, held on the last day of the Paris Climate Talks, started with a rally by over 40 people on the West Steps of the Capitol. The Raging Grannies opened and closed the march with their songs against fracking and Big Oil.

Speakers at the rally included Chris Brown of Sacramento 350, Jessica Wohlander from the Rootskeeper, Valarie Martin of Californians for Green Energy and others. I spoke about the power of the Western States Petroleum Association (WSPA) in California.

The event featured the Grinch holding a list of members of the "Oil Caucus" of the State Legislature, the 20 Democrats who voted to weaken SB 350 during the last session.

After the rally, the group marched over to the Western States Petroleum office on K Street to protest the Big Oil Lobby buying legislators' votes. Protesters wore red to represent the "drawing line" for justice because "Nature doesn't compromise, Justice can't be compromised, and Politics must respect these limits," according to an announcement from the groups.

Below is the transcript of my speech at the State Capitol:

What is the Western States Petroleum (WSPA)? It’s the trade association for the oil industry and the largest and most powerful corporate lobbying organization in the California. It represents a who’s who of oil companies ranging from Chevron to Occidental Petroleum.

The companies that WSPA represents account for the bulk of petroleum exploration, production, refining, transportation and marketing in the five western states of Arizona, California, Nevada, Oregon, and Washington. (http://www.wspa.org)

WSPA and Big Oil wield their power 5 ways: through (1) lobbying; (2) campaign spending; (3) getting appointed to positions on and influencing regulatory panels; (4) creating Astroturf groups: and (5) working in collaboration with media.

The biggest-ever gusher of Big Oil lobbying money into the state in one quarter was from July 1 to September 30, 2015. This resulted in the gutting/amending or the defeat of every bill that the oil industry opposed in the last session of the State Legislature.

In the first 9 months of 2015, oil interests spent a total $17.7 million, putting the industry on the path to exceed its own $20 million spending record from 2014, according to a new report by the American Lung Association in California (http://www.cadelivers.org/wp-content/uploads/2014/10/CleanEnergyCA_ALA_LobbyingNov2015_v4Final.pdf)

With help from the "Oil Caucus," a group of Big Oil friendly Democrats, the oil industry was successful at halting other important bills aimed at better regulating its practices. These included AB 356 (Williams), SB 248 (Pavley), and SB 484 (Allen), which would have reformed the state’s Underground Injection Control (UIC) program by requiring disclosure of chemicals used in well treatments or injections; ensuring that oil and gas projects do not contaminate aquifers containing water suitable for drinking and irrigation; requiring the State Water Board to review aquifer exemption applications; and/or requiring the shutdown of illegal injection wells if regulators fail to shut them down.

The industry also notably stopped a bill to protect the coast from oil spills, SB 788, McGuire, despite the fact that California is still recovering from the May 2015 Refugio oil spill.

Big Oil dumped a lot of money into local and regional campaigns. In 2014, Chevron alone spent $3 million (unsuccessfully) to elect their selected candidates to the Richmond City Council. The oil industry also dumped $7.6 million into defeating a measure calling for a fracking ban in Santa Barbara County and nearly $2 million into an unsuccessful campaign to defeat a measure banning fracking and other extreme oil extraction techniques in San Benito County during the November 2014 election.

Big Oil spent a total of $266 million influencing California politics from 2005 to 2014, according to an analysis of California Secretary of State data by StopFoolingCA.org. The industry spent $112 million of this money on lobbying and the other $154 million on political campaigns. (http://www.eastbayexpress.com/SevenDays/archives/2015/07/29/californias-biggest-secret-oil-industry-capture-of-the-regulatory-apparatus)

While she oversaw the crafting "marine protected areas" that fail to protect the ocean from pollution, fracking, oil drilling, military testing, corporate aquaculture and all human impacts other than sustainable fishing and gathering, her husband, James Boyd, was chair of the California Energy Commission. (http://www.energy.ca.gov/commissioners/boyd.html‎)

Governor Brown recently announced the appointment of Bill Bartling, 61, of Bakersfield, who has worked as an oil industry executive and consultant, as district deputy for Bakersfield in the Division of Oil, Gas and Geothermal Resources (DOGGR) at the embattled California Department of Conservation. (http://yubanet.com/california/Governor-Jerry-Brown-appoints-Big-Oil-executive-as-industry-regulator.php)

Not only does Big Oil spend millions every year on lobbying and campaign contributions, but it funds "Astroturf" campaigns to eviscerate environmental laws.

Leaked documents provided to Northwest Public Radio, Business Week, and other media outlets last year exposed a campaign by the Western States Petroleum Association to fund and coordinate a network of “astroturf” groups to oppose environmental laws and local campaigns against fracking in California, Washington, and Oregon. This network was revealed in a PowerPoint presentation from a November 11, 2014 presentation to the Washington Research Council, given by Reheis-Boyd.

The mainstream media has done a poor job to date covering the connections between fracking and other extreme oil extraction methods and Big Oil money and power in Sacramento. (http://www.projectcensored.org/oil-industry-illegally-dumps-fracking-wastewater)

Nor will you see mainstream media coverage of how the Los Angeles Times and the California Resources Corporation, an Occidental Petroleum spinoff, recently teamed up to create "Powering California," a Big Oil propaganda campaign website. (http://www.indybay.org/newsitems/2015/10/31/18779478.php)

Big Oil is the most powerful lobby in the state. However, action by committed activists can defeat Big Oil in spite of its money and power, as in the case of the Richmond City Council elections and the passage of anti-fracking ordinances in San Benito counties.

For more information, go to: http://redgreenandblue.org/2015/11/10/big-oil-lobbying-money-turns-california-the-wrong-kind-of-green