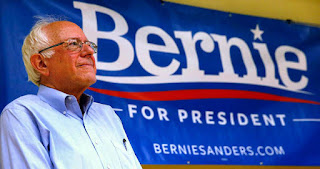 BOLIVAR, Pa.—Sen. Bernie Sanders calls himself a democratic socialist, and when voters scan the Web to see what that means, the trail often leads to a band of about 6,500 leftists pining for relevance in a country that has long deemed “socialism” a dirty word.
Since he entered the race in May, the Democratic Socialists of America have seen monthly new members spiking two and three times the levels of a year before.
Nearly 10,000 people visited the group’s website the day of the Democratic debate in Las Vegas in October—more than six times the usual number.
“This is a gift from the socialist gods,” Joseph Schwartz, a Temple University professor and a vice chairman of the Democratic Socialists, said at the group’s biennial national convention in Pennsylvania last month. About 120 people showed up—a 33% jump that members attribute to Mr. Sanders’s candidacy.
For much of their 33-year history, Democratic Socialists have had little to celebrate. Capitalism has endured. Mainstream campaigns don’t always want them around.

In a slight that made national news, they tried to give their presidential endorsement in the 1988 race to Democrat Jesse Jackson. Worried about scaring off voters, Jackson campaign aides sent back word: Don’t bother.
After Mr. Jackson got wind of this, he intervened and accepted the endorsement. “I didn’t feel the need to run from the word, ‘socialist,’ or run to the word, ‘capitalist,’ ” he said on Thursday.
Now there is a candidate who has actually come to their conventions and given speeches. What is more, the same candidate is running a surprisingly competitive race against that emblem of establishment Democratic politics, Hillary Clinton.
It is nearly too good to be true. And perhaps, it is. 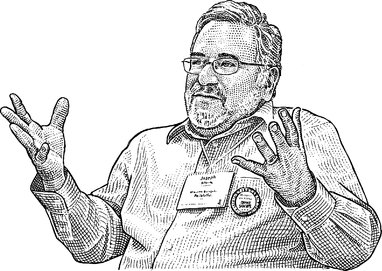 Joseph Schwartz
The socialism stuff? Mr. Sanders is playing it down. Worse still, he has abandoned his independent status and is running as a Democrat, a party many socialists deride as a tool of the capitalist elite no better than the GOP.
“I definitely would have preferred that” Mr. Sanders remain an independent, said Rahel Biru, a 28-year-old Brooklyn resident who attended the convention. “The Democratic Party is where social movements go to die.”
Even more disheartening, Mr. Sanders has suggested of late he doesn’t have much use for the democratic socialist label. He told CBS’s Stephen Colbert he prefers the more benign term, “progressive.”
A Sanders spokesman denied Mr. Sanders is de-emphasizing his socialist identity. Mr. Sanders recently devoted a speech to socialism at Georgetown University, the aide said.
Mr. Sanders, in an interview with The Wall Street Journal last month, said, “For me, what democratic socialism is about is to maintain the strong entrepreneurial spirit that we have in this country to continue to produce wealth, but to make certain that the wealth is much more equitably distributed than is currently the case.”
Vice Chairman Joseph Schwartz of the Democratic Socialists of America spoke at the group’s convention in November. PHOTO: REID JENKINS
He said he wants to build on “socialist programs” pushed by former Democratic presidents Franklin D. Roosevelt and Lyndon Johnson,including Social Security and Medicare.
Polls suggest a reason to be circumspect: Americans remain wary of socialism. A Gallup Poll over the summer tested voter attitudes toward candidates of different ethnic, religious and ideological backgrounds. Socialism ranked dead last, the survey found.
Still, the Democratic Socialists of America are seizing their moment.
“We definitely share the same immediate political program that Bernie is pushing,” said Maria Svart, the group’s national director. “We also believe that true democratic socialism would go even further. But we believe that what he is doing is a very important first step.”
Whatever their differences, the Democratic Socialists are all-in for Mr. Sanders.
The convention—where members sang the 19th-century socialist anthem, “The Internationale” (“Arise, ye prisoners of starvation!”)—had the feel of a Sanders campaign rally, absent the candidate, of course.
People wore “Bernie” T-shirts and took part in a seminar called “Putting Socialist Theory to Work in DSA’s #WeNeedBernie Campaign.
Jared Abbott, a Harvard University graduate student at the convention, said the Sanders candidacy is “opening up a door so that we can talk” about what democratic socialism means. “That’s huge,” he said.
In a bit of co-branding, the group sold red T-shirts reading, “Democratic Socialists for Bernie Sanders” and advertised DSA bumper stickers with a picture of Mr. Sanders for 50 cents apiece.
There was excited talk about the moment in the October debate when Mr. Sanders and Mrs. Clinton debated the relative merits of capitalism and socialism.
“It was mind-boggling to me,” Ms. Svart said in a speech to the members. She said she “never would have thought that in a two-major party debate the question of capitalism versus socialism would be semi-seriously asked.”
The national group has set up a fundraising committee to help the Sanders cause, though the sums are tiny by political fundraising standards. And they are trying to expand their membership as quickly as they can and spread the word about socialist theory, mindful that Mr. Sanders’s candidacy may be a fleeting moment in the sun.
They have noticed something encouraging about the Sanders-inspired new recruits: they don’t want to just gather in a salon to debate political theories; they want to engage in political fights.
“We’ve seen a qualitative difference in the people reaching out to us,” said Natalie Midiri, 23, a nanny who lives in Camden, N.J., “which is fantastic.”
Julie Allison lives in a Chicago suburb. Walking through a farmers market one day, she stopped at a table set up by the Democratic Socialists and read a pamphlet touting Mr. Sanders. Curious, she went to the group’s website, liked what she saw and signed up.
So, there she was at the convention, a 46-year-old with a background in corporate finance and a fresh convert to democratic socialism and the Sanders campaign.
“It is the first time I feel we can have positive radical change,” Ms. Allison said.
The hunt continues for more like her. Meeting in a Philadelphia coffee shop on a recent weekend, DSA members read a portion of a Depression-era play called “Waiting for Lefty.” One man sitting nearby overheard them talking about Mr. Sanders and approached Ms. Midiri to see how he could get involved.
She used the chance encounter to give him a DSA pamphlet and took down his contact information. Later she sent him a follow-up note inviting him to a DSA holiday party.
“I gave him my spiel,” she said. “Hopefully we’ll hear from him again soon.”

And a video "summary" of the article:

Not authorized by any candidate or candidate’s committee.