Bernie Sanders and "The Big Short"

Campaign for America's Future
Hollywood stars play all the major roles in the film, but it is no puff piece for the 1 percent. After watching “The Big Short” and talking to viewers, it’s hard to argue against Sanders’ demands to increase taxes on the billionaires and break up the banks, and use the revenue to fund better health care and education. 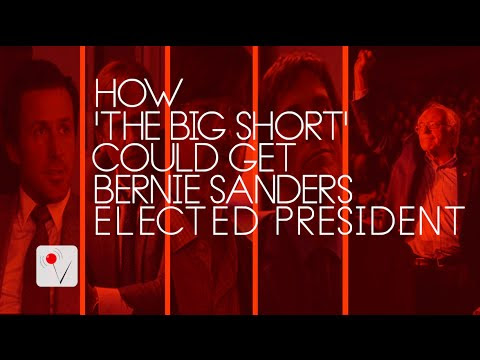 Democratic presidential candidate Bernie Sanders’ major policy speech at Town Hall in New York City on Tuesday – in which he declared that he will “break up any banks that are too big to fail and that big bankers will not be too big to jail” – felt a lot like the last scene of Adam McKay’s “The Big Short.”


Hollywood stars play all the major roles in the film, but it is no puff piece for the 1 percent. After watching “The Big Short” and talking to viewers, it’s hard to argue against Sanders’ demands to increase taxes on the billionaires and break up the banks, and use the revenue to fund better health care and education.

Sanders advocates a modern Glass-Steagall, a revival of the Depression-era law that would prevent investment banks from being on all sides of every bet except the side of the American people. And when you add in Sanders’s demands to end Super PAC campaign funding, and his own refusal to accept Wall Street funds in the current campaign, we are presented with a sharp contrast to the Hillary Clinton campaign and its supporters in the financial sector.

In the last 50 years the financial sector as a percentage of gross domestic product has grown almost four fold. “The Big Short” provides the narrative for how Wall Street keeps that growth going, with little increase in real value but lots of high salaries and high living that all count towards GDP. As the film concludes, we have done nothing much to change the rules, and whether the next financial bubble is housing or some other leveraged derivative, the result is likely to be the same. Once former Federal Reserve chairman Ben Bernanke and the Treasury Department let Bear Stearns, Lehman Brothers and a few mortgage brokers fail, they bailed out the rest and the high-living self-interest has returned.

Are establishment Democrats so enamored with free markets, and addicted to the political contributions from financial high rollers, that the party establishment has rushed to embrace Clinton with no real demands for change? As we learned eight years ago, the words uttered during a primary campaign bear little resemblance to presidential policies. And even Clinton campaign policy is more of the same, rather than a real challenge to financialization and its demands that finance capital trump citizen rights on issues ranging from global trade to regulation.

“The Big Short” encourages the audience to demand real change. Viewers identify with the working-class family that loses their home even though they were paying the rent each month, as the owners fell behind on their mortgage when their adjustable rate shot up and foreclosure followed. We even identify with those who bet against the investment banks and sold their leveraged mortgage debt short, even though those investors profited hugely from the misery of the people and acknowledged it.


But the answer is not a repeat and a new crop of short sellers who profit once again. The answer is the political revolution, as Sanders calls it – not just for a political democracy with voting rights in and money out, but for financial revolution that breaks up the banks; separates commercial, consumer and investment banking; and prevents regulators or White House officials from circulating between fat jobs on Wall Street and political service that rewards their previous and next employers.


“Enough is enough,” as Bernie says. As Fannie Lou Hamer said 50 years ago as she fought for voting rights in Mississippi, “I am sick and tired of being sick and tired.” We can still dream of an America where making things and providing real services is at the heart of what we do. We can dream of an America where young college graduates prefer teaching or health care to easy money in finance.


But as we celebrate the New Year, let’s commit to real change. Bernie Sanders has challenged us to join him in a political revolution that goes far beyond the presidency. If not now, when?
Reposted from Portside and the Campaign for America's Future