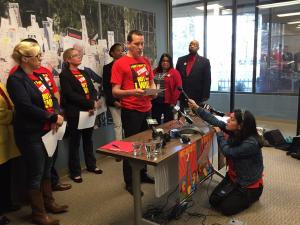 A five-day strike on all 23 CSU campuses will be held in April if the statutory process fails to produce an agreement over faculty salaries, CFA leaders announced Monday during a news conference at CFA Headquarters in Sacramento.
On Friday, Feb. 5, the CFA Board of Directors unanimously approved a strike from April 13-15 and April 18-19, 2016 on all campuses, including satellite locations. The strike dates were met with raucous applause and chants of “Strike! Strike!” by CFA members when they were announced during CFA’s spring Kickoff in Los Angeles over the weekend.
The strike dates were recommended by presidents from CFA chapters throughout the state.
“CSU faculty are angry…” CFA President Jennifer Eagan told reporters. “Unlike our peers, we have not been able to keep up with the cost of living in California and recover from the recession. Our ask of 5% plus a step increase is not a raise, but a partial recovery from the deep hole that our faculty have been in for over 10 years. We are exerting our right to defend ourselves and our families from economic disaster.”

Q19:  Is the faculty prepared to strike?
We had record turn out and a 94.4% “yes” vote to strike, so the faculty are willing to strike. No one takes going out on strike lightly, but the issues at stake here are important to our families, our profession, and our students. We must take action.  The justice issues are connected to and equally important to the issue of salary. We’re in it to save public higher education for CSU students and for the health of the state of CA.
Q20: What should I tell my students?
It is important to tell students the dates of the strike, once they are determined, and to explain why you are going on strike. Each faculty member will, of course, make a personal decision communicating with students. Many faculty members may also want to invite students to join them on the picket line. If this is your choice, you must emphasize to students that joining the picket line is entirely voluntary.
IF A STRIKE IS CALLED…
Q24: If a strike is called, what will CFA ask faculty on my campus to do?
CFA will ask every CSU faculty member to refrain from teaching and all other work he or she normally does on the day(s) of the strike. CFA also will ask all faculty to join the picket lines and rallies that will be underway on the campuses. The presence of large numbers of faculty would be the best way to send a strong message to the chancellor that we are serious about the Fight for Five.
Q25: If a strike is called, could my participation lead to dismissal or other disciplinary actions?


No. If a legal strike were called, it would be unlawful for the administration to attempt to dismiss or discipline any faculty member for participating. It is a violation of state law to attempt to dismiss or discipline a faculty member for exercising the right to participate in a lawful job action such as a strike. CFA advocates on staff, on retainer, and from our national affiliates would assist any individual or groups experiencing a negative outcome as a result of lawful job actions.
Posted by Duane Campbell at 9:14:00 PM