Trade Deal is an Attack on Working People 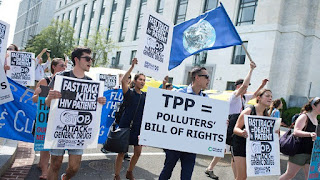 As a dozen nations gather in New Zealand this week to officially sign the Trans-Pacific Partnership (TPP), working families in the United States are sounding the alarm on a deal that would lower wages and ship even more jobs overseas.
The final text of the agreement, released in November, is even worse than we imagined, with loopholes in labor enforcement and rewards for outsourcing. Like its predecessor agreements NAFTA and CAFTA, the TPP is a giveaway to big corporations, special interests and all those who want economic rules that benefit the wealthy few. It is no wonder the presidential front-runners from both political parties oppose it.
It didn’t have to be this way. The labor movement supports trade. We know that opening up new markets to American products the right way can create jobs and lift up working people. But trade must be done under a fair set of rules that puts people ahead of profits. The TPP fails that test miserably.

From the outset, the AFL-CIO provided detailed and substantive suggestions for improving this agreement and evidence to support our positions. On everything from labor enforcement to investment rules, we offered a path forward. Unfortunately, our policy recommendations were ignored, as were those from the environmental, consumer, public health, global development and manufacturing sectors. That’s what you get from secret
negotiations driven by corporate and investor interests.
There are countless ways the TPP would be disastrous for working people. Here are a few of the most egregious.

After much talk about labor standards, the TPP falls woefully short. It retains the totally discretionary nature of enforcement and does nothing to streamline the process so labor cases will be addressed without delay, leaving workers with no assurance of improved conditions. The “consistency” agreements negotiated with Vietnam, Malaysia and Brunei don’t add any responsibilities beyond the current labor chapter and give Vietnam five years to come fully into compliance, even though it will receive the benefits of the TPP immediately. There is no deal to address longstanding labor problems in Mexico that have not been remedied despite 20 years of efforts to enforce NAFTA.
The TPP would take a sledgehammer to American manufacturing. The auto rules of origin are so weak that a car or truck made primarily in China or another non-TPP country would still qualify for trade benefits. Popular “Buy American” rules are watered down, requiring the U.S. government to treat bidders from every TPP country as if they were American. Finally, the lack of any enforceable currency manipulation rules means foreign nations can continue to cheat U.S. companies and workers. These features make the TPP an outsourcing deal, not a trade deal.
To add insult to injury, more than 9,000 new foreign companies will be empowered to bypass U.S. courts and access a private justice system — investor-state dispute settlement — that allows them to hold U.S. federal, state and local government decisions ransom. Let that soak in for a minute. Wal-Mart’s Japan subsidiary could sue Seattle for denying a building permit. ExxonMobil’s Vietnamese affiliate could come after the United States for rules and regulations that protect our air and water.
The TPP is also a giveaway to Big Pharma, expanding monopoly rights that will allow drug companies to further drive up costs for patients. These rules are far worse than the ones in the Peru, Colombia and Panama deals negotiated by former President George W. Bush. Doctors Without Borders says the TPP would “jeopardize people’s access to affordable medicines.”
We’ve been down this road before. The Wall Street and Washington elite always tell us that this time will be different. The truth is these trade deals have ripped apart the fabric of our nation. We see the shuttered factories. We visit towns that look like they are stuck in the past. We talk to the workers who lost everything, only to be told they should retrain in another field — but Congress has been slow to fund and authorize those programs. From NAFTA to CAFTA to Korea and now the TPP, these agreements have continually put profits over people. By driving down our wages, they make our economy weaker, not stronger.
In many ways, the TPP is a new low. A quick search of the agreement shows no mention of the terms “raising wages” or “climate change.” And by ramming through fast track legislation last year, Congress effectively barred itself from making a single improvement to the TPP.
Working people deserve a better process and a better product. We understand better than anyone that the TPP is just another tool to enrich corporations at the expense of everyday families. We cannot and should not accept it.
Because it can’t fix the TPP, Congress has to take the step of saying to 11 other countries, “No, not this TPP.” Taking that brave step is necessary to create trade rules that lift people up, not crush them under crony capitalism.
Trumka is president of the AFL-CIO.
Posted by Duane Campbell at 5:57:00 PM