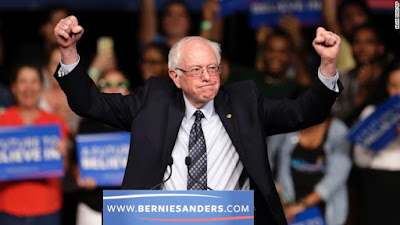 The results are in and we were just declared the winner in a very important state for our campaign: Michigan. That’s a major, game-changing victory for our campaign.
The corporate media counted us out. The pollsters said we were way behind. The Clinton super PACs spent millions against us across the country. We were hit with a dishonest attack in the debate. But we won, again… and if we continue to stand together, we can win this nomination.
One week from today, five large and delegate-rich states vote. Time and time again, your support has enabled us to overcome large deficits and emerge victorious. But you can expect the political establishment to come after us even harder now. The super PACs are going to spend even more. We have to be prepared to fight back.
Posted by Duane Campbell at 8:54:00 PM