Update: As of April 8, the two sides have reached a tentative agreement. The agreement includes all the demands the union made. More details to follow. 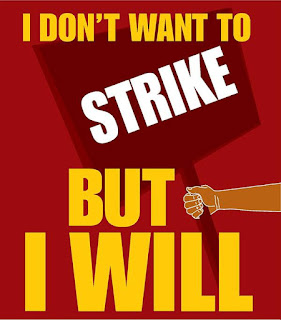 Seth Sandronsky:
Members of the 26,000-strong California Faculty Association (CFA) are threatening to carry out their first system-wide, simultaneous strike in the event contract talks with the California State University administration (CSU) reach a stalemate. The union, which represents faculty, counselors, librarians and athletics coaches, is seeking a five percent raise, along with 2.65 percent service step, or seniority, increases, and says its members will walk out on all 23 campuses April 13-15 and April 18-19. (Disclosure: CFA is a financial supporter of Capital & Main.)


The university system claims it cannot afford to pay the salary increases and is offering a two percent salary hike. “Half of all the new state funding provided to the CSU this year is being directed toward employee compensation,” said CSU Chancellor Tim White in an email to Capital & Main.
Union president Jennifer Eagan, a philosophy and public affairs professor at CSU East Bay, said by phone that CSU management failed to allocate sufficient money for union members’ pay raises. “The CSU does have the funding for the five percent salary increase,” she said, “with a $5 billion operating budget and $500 million in positive cash flow.”


The CFA and CSU presented their respective evidence to neutral factfinder Bonnie Castrey, who is based in Huntington Beach, after the parties failed, after 11 months, to resolve contract differences during negotiations and mediation. A state mediator had directed the CFA and CSU to fact-finding on October 15, 2015. The CFA hearings took place November 11 and December 7 in Sacramento. The CSU hearing occurred January 13 in Long Beach.
Castrey’s 16-page report, publicly released March 28, recommended that CSU pay its union members the five percent pay hike they are seeking. In its response, however, management claimed the union’s position would harm students and “create a long-term structural deficit.”
The CSU could avert a CFA strike before it begins or in midstream, according to Kevin Wehr, a sociology professor at CSU Sacramento, and chair of the CFA bargaining committee. A strike would bring a near shutdown of CSU’s daily operations, Wehr said, adding, “We will withhold our labor and set up picket lines. There will be no classes, emails or committee work. The strike will be our job.”
“We are looking for the CSU to provide us with a reasonable offer,” said Eagan. As yet, no university offer is on the horizon.
According to the CSU, administrative functions would continue during a strike. Meanwhile, management is preparing for a strike in part by addressing other workers.
“Other represented employees in the CSU are prohibited from engaging in sympathy strikes and thus may not also go on strike,” said a CSU statement. “Other union employees and activists who are not part of the CSU can participate.”
The union has garnered strike support from advocacy groups such as the nationwide League of United Latin American Citizens, along with the American Association of University Professors, California Democratic Party, Clergy & Laity United for Economic Justice, the California Labor Federation and other labor organizations.
Public opinion in a possible CFA strike matters, although it is unclear how Californians view such an action.
CFA members would not receive pay during a strike. Accordingly, the union’s strike fund for a walkout on campuses from San Diego in the south to Humboldt in the north would help unpaid rank-and-file strikers who struggle to make ends meet.
Businesses on and near campuses statewide would likely feel a negative impact from a strike. Small firms would take a bigger financial hit than large companies.
In the meantime, the CFA is presenting its case to elected lawmakers at the state Capitol. An email campaign to Governor Jerry Brown urges him to contact CSU Chancellor Tim White to consent to the union’s salary proposals.