Michelle Obama on Trump and Hillary 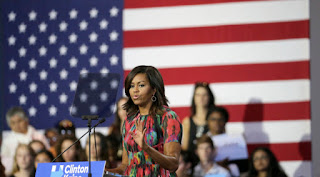 Michelle Obama urged young people to vote at a pair of rallies Tuesday and knocked Donald Trump for his volatile personality and constant conspiracy-mongering.


Obama's remarks in Charlotte, North Carolina on Tuesday morning were punctuated with references to Trump’s erratic behavior over the past week, which saw him struggle to get through his first debate against Hillary Clinton, double down on attacks on a former Miss Universe, and try to account for a $916 billion business loss listed in tax returns published by the New York Times —all while, as Obama put it, "popping off" on Twitter.

“We also need someone who is steady and measured, because when making life or death, war or peace decisions, a president can't just pop off or lash out irrationally,” Obama said. “Someone who’s roaming around at 3:00 a.m., tweeting, should not have their fingers on the nuclear codes.”

Then, referencing Trump’s complaints about faulty sound levels in the hall at the first presidential debate, Obama said “Hillary Clinton is tough. I’ve watched her. When she gets knocked down, she doesn’t complain, she doesn’t call foul.”

She tapped her own microphone, testing it for sound:


Obama also referenced Trump’s claim in the first presidential debate that not paying federal income taxes would make him “smart.”

“We need someone who’s honest and plays by the rules, because not paying taxes for years and years while the rest of us pay our fair share doesn’t make you smarter than the rest of us,” she said. A bombshell New York Times Saturday night that showed Trump may have used a $916 billion business loss in 1995 to avoid federal income tax for the next 18 years.

“No, we need a president who will choose to do what’s best for the country,” Obama said, "even when it doesn’t personally benefit them.” Obama gave a similar speech later in the day in Raleigh, where she reminded voters of the vote margin in North Carolina's last two presidential races: In 2008, her husband won North Carolina by 14,000 votes, or a little over two votes per percent, but in 2012, he lost by 17 votes per precinct, she said.

"And as you're working your hearts out for Hillary," Obama continued, "if you start to feel tired, if you start to feel discouraged by the negativity in this election, if you just want to hide under your bed and wait until it's all over, I really want you all to remember what's at stake."
Posted by Duane Campbell at 2:58:00 PM