Responding to Donald Trump as a Tax Cheat 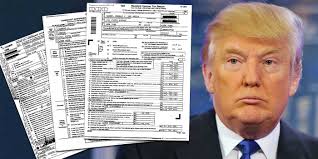 An investigative team at the New York Times is out with a blockbuster story today: Trump’s massive business losses—totaling nearly $1 billion in 1995 alone—could have allowed him to pay $0 in federal income taxes for nearly two decades.1
This story intensifies the speculation of why Trump refuses to release his tax returns—as every presidential candidate has since the 1970s. It's a question Senator Elizabeth Warren zeroed in on in a mega-hit viral video she released with MoveOn, which already has over 26 million views.

Undecided voters in North Carolina "gasped" when they heard Trump boast in last Monday's debate that not paying federal taxes would make him "smart."2 Most people understand that paying federal taxes—and, through them, paying for our nation's infrastructure—is our responsibility as Americans.
This new revelation from The Times could shift the usually high number of undecided voters this close to the election—if we hammer home this message now.


Here's the truth: there is nothing smart about refusing to pay your fair share along with hundreds of millions of working people, many of whom are struggling to get by on stagnant wages because of policies supported by Donald Trump and his Republican Party.

We're gearing up to expose Trump in key swing states as the dishonest, deceitful, apparent tax dodger he is. Can we count on you to chip in $2.70 now?

Your contribution will also support our massive field operation in the battleground states. We have more than 100 organizers teaming up with tens of thousands of volunteers to knock on more than one million targeted doors in swing states to persuade undecided voters and make sure that no progressive stays home on Election Day.
We’ll be spreading critical talking points on Trump’s attitude and record on taxes, along with new materials to ensure the voters we talk to know that the Republican presidential candidate may not have paid any income taxes for 18 years—and maybe more.
Let’s be clear: If you and I avoided our taxes for 18 years, we’d be going to prison—but Donald Trump may have gotten away with it year after year. The least we can do then is make sure he’s never elected president.