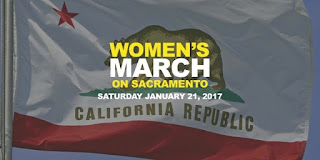 Next Steps;
We'll need to partner closely with other organizations and individuals as we go, so that we can be greater than the sum of our parts. For instance, the amazing organizers who led the charge on the Women's March are promoting 10 actions that we can all take in the first 100 days of Trump's Administration. We'll help promote this and other collective efforts.
Posted by Duane Campbell at 5:27:00 PM

Email ThisBlogThis!Share to TwitterShare to FacebookShare to Pinterest
Labels: next steps, Women's March

Looking for others who want to participate in #ResistTrump Tuesdays by going to our elected officials' district offices. More info at Moveon.org and Indivisible.us.

This week we are focusing on cabinet confirmations.

I am an American man, and I have decided to boycott American women. In a nutshell, American women are the most likely to cheat on you, to divorce you, to get fat, to steal half of your money in the divorce courts, don't know how to cook or clean, don't want to have children, etc. Therefore, what intelligent man would want to get involved with American women?

American women are generally immature, selfish, extremely arrogant and self-centered, mentally unstable, irresponsible, and highly unchaste. The behavior of most American women is utterly disgusting, to say the least.