Statement on Protests at U.C. Berkeley 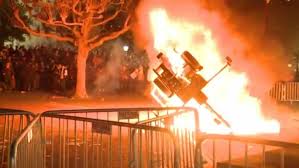 Statement by U.C. Berkeley Chancellor on  Protests  Last Night
We condemn in the strongest possible terms the violence and unlawful behavior that was on display, and deeply regret that those tactics will now overshadow the efforts to engage in legitimate and lawful protest against the performer’s presence and perspectives.
The University and the UCPD went to extraordinary lengths to plan for this event and put the appropriate resources in place in order to maintain security. Officials were in contact with other campuses and paid close attention to lessons learned at the speaker’s prior events. Dozens of additional police officers were on duty. Multiple methods of crowd control were in place. Ultimately and unfortunately, however, it was simply impossible to maintain order given the level of threat, disruption, and violence.
We regret that the threats and unlawful actions of a few have interfered with the exercise of First Amendment rights on a campus that is proud of its history and legacy as home of the Free Speech Movement. As Chancellor Dirks made clear in his message to the Berkeley campus community, while Mr. Yiannopoulos views, tactics and rhetoric are profoundly contrary to our own, we are bound by the Constitution, the law, our values, and the campus’s Principles of Community to enable free expression across the full spectrum of opinion and perspective.
Read the UC Berkeley chancellor’s message, prior to the event, on the Milo Yiannopoulos appearance.

Editor Note:  The Left needs to develop means to control or disassociate itself from the action of infantile anarchist movements,  These actions actually advance the agenda of the authoritarian Trump Administration by distracting attention from the important struggles against Trump's border wall, the ban on Muslims, the appointments of neo fascists to government positions.  See post below on non violence.
Posted by Duane Campbell at 8:26:00 AM