CWA On Strike at AT & T Sites. 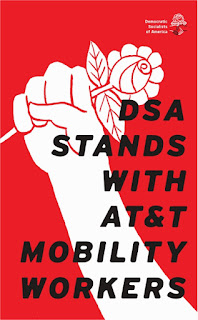 The strike is over- for now. The CWA workers have gone back to work.

CWA union members have been working closely with DSA on organizing efforts across the country. 38,000 CWA folks at AT &T have been working without a contract. This has gone on far too long. Now AT&T workers in 36 states and Washington, DC are on strike.
DSA's national Steering Committee endorses this strike. DSA local groups and individual members are joining striking workers at picket lines across the country. Click here to RSVP for Friday, Saturday, or Sunday. Downloadable DSA solidarity signs are available here and here.
Members who can't join a picket line are encouraged to email AT&T CEO Randall Stephenson and tell him to settle now.
UPDATE: DirecTV employees are joining the potential strike as well. Now 40,000 workers are ready to stand up for their livelihoods — and their dignity.

Join the CWA picket lines at the locations below and support our comrades fighting for better wages and better livelihoods!


Our friends at the Communication Workers of America need you. CWA union members have been working closely with DSA on organizing efforts across the country. Now 38,000 CWA folks at AT&T are fighting for their livelihoods. DSA's Steering Committee endorses their actions, and we want you to know about it. You can help workers right now by emailing AT&T CEO Randall Stephenson. And thank you!In solidarity,Maria Svart, DSA National DirectorCWA member Cindi Chesters:

I may be on strike Friday along with 38,000 of my coworkers at AT&T if we haven't won a fair union contract by then. I’m a single parent of four and there is a lot on the line for me. My kids are the reason I’m fighting so hard and why I’m ready to do whatever I have to do to make sure they have a good life. We hope to avoid having to strike, but we may have to make that sacrifice to make sure our livelihoods are secure.
Please stand with us. Click here to email AT&T CEO Randall Stephenson now and demand that he settle a union contract that protects good jobs.
I work at an AT&T retail store, but the company wants to keep closing stores and instead send work to third-party dealers where workers make super low-wages and don’t have the union protections we have. Meanwhile, my co-workers at AT&T call centers worry that their jobs will be sent overseas.
CEO Stephenson made $28.4 million last year, while he cut our commissions, which meant I took home less pay than the year before. This fight is about making sure working people can make a decent living in this country. We are up against unaccountable corporations that are working us harder for less in order to pad their bottom line.

As the only income for a family of five, my budget is tight as it is, and the money I may lose if I go on strike isn’t something I take lightly. That’s why I’ve been preparing, saving money, stocking up on groceries, and making a plan.
Please take action and send a message to the CEO that you support workers fighting for their livelihoods.
There is too much on the table for us to sit back and let the company take advantage of us anymore. We want to be treated like human beings.
If we strike, we’re following in the footsteps of our brothers and sisters at Verizon who last year struck for 49 days and won big improvements for themselves, their families, and sent a message that corporate giants can be beat if working people stick together.
Thank you for your support. If we strike, we'll be back in touch with more information about how you can support us on a picket line near you. Until then, I hope you’ll email CEO Stephenson to make sure he knows his customers and members of the community have our back.


Thank you for listening to my story,